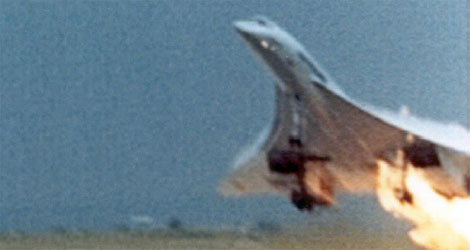 Air France flight AFR4920 took off from runway 26 right at Roissy Charles de Gaulle Airport, shortly before rotation, the front right tyre (tyre No 2) of the left landing gear ran over a strip of metal, which had fallen from another aircraft, and was damaged. Debris was thrown against the wing structure leading to a rupture of tank 5. A major fire, fuelled by the leak, broke out almost immediately under the left wing. Problems appeared shortly afterwards on engine 2 and for a brief period on engine 1.

The aircraft took off. The crew shut down engine 2, then only operating at near idle power, following an engine fire alarm. They noticed that the landing gear would not retract. The aircraft flew for around a minute at a speed of 200 kt and at a radio altitude of 200 feet, but was unable to gain height or speed. Engine 1 then lost thrust, the aircraft’s angle of attack and bank increased sharply. The thrust on engines 3 and 4 fell suddenly. The aircraft crashed onto a hotel.

The accident was due to the following causes:

• High-speed passage of a tyre over a part lost by an aircraft that had taken off five minutes earlier and the destruction of the tyre.
• The ripping out of a large piece of tank in a complex process of transmission of the energy produced by the impact of a piece of tyre at another point on the tank, this transmission associating deformation of the tank skin and the movement of the fuel, with perhaps the contributory effect of other more minor shocks and /or a hydrodynamic pressure surge.
• Ignition of the leaking fuel by an electric arc in the landing gear bay or through contact with the hot parts of the engine with forward propagation of the flame causing a very large fire under the aircraft’s wing and severe loss of thrust on engine 2 then engine 1.

In addition, the impossibility of retracting the landing gear probably contributed to the retention and stabilisation of the flame throughout the flight.
Download Report