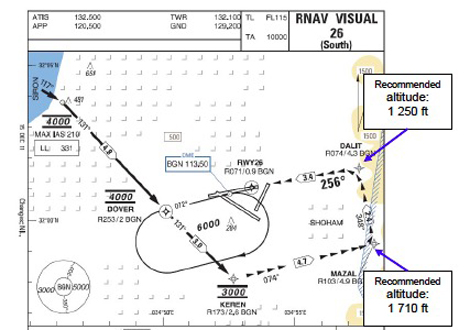 The meteorological conditions on arrival were CAVOK.

At 12 h 49, the Tel Aviv controller cleared the crew of Air France flight AF1620 to make an approach to runway 26 via KEREN point, according to the RNAV VISUAL procedure. At about 10 NM from DOVER point, the controller requested that the crew reduce speed to minimum manoeuvring speed in clean configuration. The aeroplane was stable at 4,000 ft. The autopilot, auto-thrust and flight directors (AP, A/THR and FD) were engaged. The speed selected was 210 kt. ATC asked the crew to reduce speed to below 180 kt from DOVER point. Shortly before this point, the crew of Air France flight AF1620 displayed an altitude of 3 000 ft on its flight control unit (FCU). The descent was then carried out in DES/NAV mode.

At 12 h 53 min 56, the aeroplane passed KEREN point at a speed of 180 kt, and at an altitude of 3,280 ft. The PF indicated having the feeling of being “too high, too fast”: she did not share her doubts with the PNF who did not notice any particular difficulty.
The aeroplane captured the 3,000 ft altitude. At 12 h 54 min 30, from the middle of the downwind leg, the crew selected an altitude of 1,000 ft and changed from vertical mode DES to OPEN DESCENT.

Engine thrust decreased to idle. Ten seconds later, the crew engaged “managed speed” and then extended the landing gear and changed to configuration 3. Several seconds later, they changed to FULL configuration which led to a decrease in speed towards the Vapp approach speed, which is 138 kt.
At 12 h 56 min 05, before the last turn, at 1,540 ft, the autopilot of Air France flight AF1620 was disconnected manually; the A/THR and FD remained engaged. The PNF stated that he was focused on capturing the approach path and with external monitoring of an aeroplane preceding them on final.
At 12 h 56 min 10, during the last turn with a bank of about 20°, the PF made a pitch-up input for about ten seconds.
The recorded parameters indicated that during this phase the FD command bars gave a pitch-down order to maintain the target speed with the engines on idle.

The crew of Air France flight AF1620 indicated having heard the “SPEED, SPEED, SPEED” aural warning during the turn. The PF then carried out a go-around without calling it out to the PNF and placed the thrust levers into the TOGA detent.

For two seconds, the PNF gave a pitch down order contradicting the PF’s inputs, without pressing the takeover pushbutton on the sidestick. He indicated that he still had in mind to continue the approach.

Two seconds later, the ALPHA FLOOR mode engaged, followed by the TOGA LOCK mode. The crew of Air France flight AF1620 selected configuration 3 and an altitude of 3,000 ft. The speed was increasing. The PF pulled back the thrust levers to CLIMB, without any effect on thrust: TOGA LOCK mode was still engaged but the crew had not identified it.

The PNF mentioned that the PF had experienced difficulties in reducing thrust. Approaching 2,000 ft, the crew of Air France flight AF1620 selected an altitude of 2,000 ft, re-engaged the autopilot, retracted the landing gear and selected configuration 1. The crew then selected a speed of 188 kt. The speed was then 208 kt and continued to increase. As a result of its inertia, the aeroplane reached a maximum altitude of 2,500 ft. The speed reached 223 kt. The VFE in configuration 1 was 215 kt. The crew heard the overspeed warning. The PF moved the thrust levers to IDLE, which disengaged the A/THR and the TOGA LOCK mode. The crew reengaged the A/THR, carried out a second approach and landed without difficulty.

The proposal of an RNAV VISUAL approach by Tel Aviv ATC to all airlines indiscriminately, departing from the initial concept, the absence of training in RNAV VISUAL approaches at Air France at the time of the event and the short preparation for the approach made by the crew did not allow the Captain to anticipate the PF’s difficulties in performing this unusual approach.
In addition poor understanding of A/THR operation and of the importance of following the FD in OPEN DESCENT mode, which led the crew of Air France flight AF1620 to believe that A/THR would ensure that speed was maintained. Failure to identify the risks associated with the selection of FULL configuration at the end of the downwind leg in OPEN DESCENT mode and inadequate monitoring of the flight parameters led to deviating below the manoeuvring airspeed before the last turn.
During the last turn, while the aeroplane had an insufficient energy level, given its configuration, a prolonged pitch up order led to the triggering of the low energy SPEED, SPEED, SPEED warning and then of the ALPHA FLOOR protection.