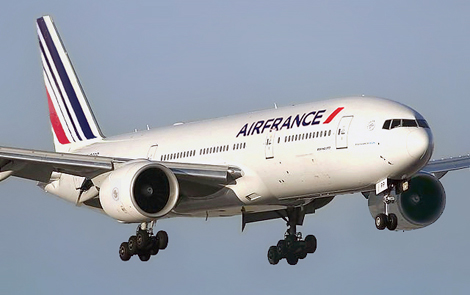 The following elements are based on recorded data (QAR, FDR) and accounts from the flight crew.  The CVR, which was safeguarded by the crew, was erased by mistake before it could be read out by the BEA.

The crew reported that the flight was proceeding with no particular problems.

The descent was radar vectored to runway 08R at Paris Charles de Gaulle airport. The meteorological conditions led the control service to implement the LVP procedure. Due to the visibility, the captain decided to make an automatic category 3 ILS final approach (CAT3).

The relief pilot was in the cockpit, on the central observers seat.

At 9 h 29 min 39, while the aircraft was established on the glide path and localizer, the amber warning “NO LAND” was displayed on the EICAS. The indication “LAND” previously displayed in green on the PFD was replaced by “LAND”. The “Master Caution” warning was recorded.

At 9 h 29 min 47, the PF advanced the thrust levers to the stop in two seconds.  He disconnected the auto-throttle (AT).
Simultaneously, a nose-up input by the PF on the control column was recorded but it was not strong enough to disconnect the autopilot. The radio height was 250 ft. The CAS was 136 kt.

At 9 h 29 min 48, the pitch decreased and the CAS increased one second later.

The relief pilot of Air France flight AF471 called out “pitch attitude” […] the PF and the PNF almost simultaneously applied a nose-up input.

The AP was disengaged. Vertical acceleration reached 1.84 g. The pitch attitude changed from -2° to +7° in 2 seconds then dropped again to +4°.

Between 9 h 29 min 57 and 9 h 30 the PFs nose-down input and the PNFs nose-up input on the wheel cancelled each other out: the wheel returned to the neutral position. The CAS was 169 kt. The relief pilot once again said “pitch attitude”.

At 9 h 30, the PF stopped attempting to apply a nose-down input and the overall order given by the position of the control column was nose-up.

The recorded vertical acceleration was 1.71 g. The pitch attitude changed from +5° to +11° (in two seconds).

At 9 h 30 min 12, the landing gear lever was positioned on “retracted”.
The radio height was 870 ft. The PF followed ATC instructions (4,000 ft on the extended centreline, previously given).
He set up the aircraft again for a CAT3 AUTOLAND final approach. The landing took place without any particular problems.

This serious incident was due to the inadequate monitoring of flight parameters by the flight crew.

The following factors contributed to this: