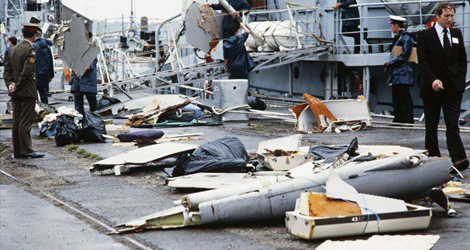 On the morning of 23rd June 1985 , Air India flight AI182 , a Boeing 747 aircraft VT-EFO (Kanishka) was on a scheduled passenger flight from Montreal and was proceeding to London enroute to Delhi and Bombay.

It was being monitored at Shannon on the Radar Scope. At about 0714 GMT it suddenly disappeared from the Radar Scope and the aircraft, which has been flying at an altitude of approximately 31.000 feet, plunged into the Atlantic Ocean off the south-west coast of Ireland at position latitude 51° 3.61N and Longitude ~2° 49 1W.

This was one of the worst air disasters wherein all the 307 passengers plus 22 crew members perished.

The fact that emergency had arisen was first noticed by Shannon Upper Area Control (U A C) after the aircraft had disappeared from the Radar Scope.

The control gave a number of calls to the aircraft; but there was obviously no response. Thereafter various messages were transmitted and that is how the rest of the world came to know of the accident.

Shannon Control at 0730 hours advised the Marine Rescue Coordination Centre (M R C C) about the – situation which appeared to have arisen.

MRCC, in turn, explained the situation to Valencia Coast Station and requested for a Pan Broadcast.

Thereafter ships started converging on the scene of the accident and they commenced search and rescue operations.

The Air India flight AI182 in question – Kanishka, was named after the most powerful and famous king of the Kushanas who perhaps ruled in India from AD 78 to AD 103.

Besides being a great conqueror, he was an ardent supporter and follower of Budhism – a religion which preaches non-violence. Emperor Kanishka, however, met a violent end. After 25 years of reign he was killed by some of his own subjects.

His life was thus brought to an abrupt end.

It is lndeed ironical that the Jumbo Jet which bore the name “Kanishka” also met with a violent and a sudden end on that fateful morning of 23rd June, 1985

From the evidence which is available what has now to be determined is as to what caused the accident.

Finding the cause of the accident is usually a deduction from known set of facts.

In the present case known facts are not very many, but there are a number of possible events which might have happened which could have led to the crash.

The first task is to try and marshal the facts which may have a bearing as to the cause of the accident.

It is undisputed, and there is ample evidence on the record to prove it, that Air India flight AI182 had a normal and uneventful flight out of Montreal.

The aircraft had been in air for about five hours and was cruising smoothly at an altitude of 31, 000 feet.

The readout from the CVR shows that there was no emergency on board till the catastrophic event had occurred.

This is corroborated by the printout available from the FDR. The event occurred at approximately 0714Z and that brought the aircraft down, and it probably hit the surface of the sea within a distance of 5 miles.

The time within which the plane came down at such a steep angle could not have been more than very few minutes. There was a sudden snapping of the communication between the aircraft and the ground. The aircraft had also suddenly disappeared from the radar.

It is evident that an event had occurred at 31,000 feet which had brought down ‘Kanishka ‘.

What could have possibly happened to it?

The aircraft was apparently incapacitated  and this was due either to it having been hit from outside; or due to some structural failure; or due to the detonation of an explosive device within the aircraft.

Evidence indicates that after the event had occurred, though the pilots did not or were not in a position to communicate with the ground, they nevertheless appeared to have taken some action. According to Mr. Laflamme, witness No. 12, the examination of the wreckage showed that spoilers had been deployed and this must have been done with a view to enter into emergency descent, He has further speculated that such an emergency descent would support or perhaps cause a ruptur in the forward area or a partial damage to the hydraulic system or damage to the control system which created such a condition that the pilots were not able to control the flight.

The wreckage further showed that the jack screw for the stabilizer trim was found in the nose-up position and it was hard to explain how this got there merely as a result of impact with the water.

The trim being in that position could only have been due to the pilot selecting it or as a result of a situation created by an explosion. In that position, and at a high aircraft speed, there would have been an extremely high g-loading on the aircraft.

After going through the entire record we find that there is circumstantial as well as direct evidence which directly points to the cause of the accident of Air India flight AI182 as being that of an explosion of a bomb in the forward cargo hold of the aircraft.

At the same time there is complete lack of evidence to indicate that there was any structural failure.