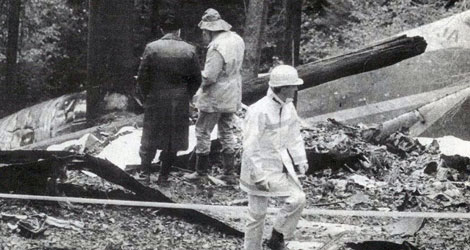 Alitalia flight AZ404 departed from Milan – Linate airport on the 14th November 1990 at 1836 hrs with the destination Zürich. After a problem-free flight, the crew were cleared by Zürich Approach to descend to 4000 ft (QNH) and to make an approach on the ILS 14.

At 14 NM from the threshold of RWY 14, the aircraft of Alitalia flight AZ404 captured the localiser 14 and at about 11.5 NM descended through the cleared altitude of 4000 ft, instead of, as prescribed, leaving it when intercepting the glide path at 8 NM.

Alitalia flight AZ404 descended with a constant rate of descent during the whole final approach, about 1400 ft below the correct glide path. At 1911 hrs, 5.2 NM from runway 14, the aircraft first struck the trees, and then the surface of the wooded north-face of the Stadlerberg.

After the collision a fire started. The 40 passengers and 6 crew members were fatally injured, the aircraft was destroyed. There was also considerable damage to the forest.

The accident was caused by:

For Alitalia flight AZ404 there is a short “side” report, on the chain of alert, timing of rescue and how the rescue was managed and carried out.