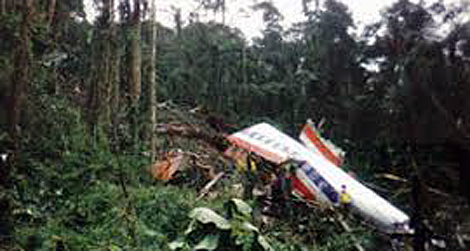 The accident site was near the town of Buga, 33 miles northeast of the Cali VOR (CLO). The airplane impacted at about 8,900 feet mean sea level (msl), near the summit of El Deluvio and approximately 10 miles east of Airway W3.

Of the 155 passengers, 2 flightcrew members, and 6 cabincrew members on board, 4 passengers survived the accident.

On the previous flight under a different crew, the airplane arrived at MIA from Guayaquil, Equador, at 1438, on December 20, 1996. The Guayaquil to MIA flightcrew reported that there were no significant maintenance or operations-related discrepancies on the airplane.

The captain and first officer of AA965 (MIA to SKCL) arrived at the airline’s MIA operations office about 1 hour before the proposed departure time of 1640.

The operations base manager later stated that both the captain and first officer were in his office about 40 minutes before the required check-in time, and appeared to be in good spirits.

According to the dispatcher at MIA, American Airlines flight AA956 was delayed about 34 minutes, waiting for the arrival of connecting passengers and baggage.

The flight departed the gate at 1714, and then experienced another ground delay of 1 hour 21 minutes that the flight dispatcher stated was related to gate congestion due to airport traffic.

The flight then passed abeam Cartegena (CTG). Bogota Center subsequently cleared the flight to fly direct from BUTAL to the Tulua VOR (ULQ)

At 2103 American Airlines flight AA956 estimated to Bogota Center that they would cross BUTAL at 2107.

As the flight passed BUTAL, Bogota Center again cleared the flight from its present position to ULQ, and told the flight to report when they were ready to descend.

At 2111, Cali weather was reported as clear, visibility greater than 10 kilometers, and scattered clouds. At 2126:16, AA965 requested descent clearance. The flight was initially cleared to FL 240 and then to FL 200.

At 2134:04, the flight was instructed to contact Cali Approach Control (Approach).

” The controller asked, “the uh, distance DME from Cali?”

The captain of American Airlines flight AA956 replied, “the DME is six three.”

The controller stated, “affirmative.” The captain replied at 2135:27, “Thank you. At 2135:28, the captain informed the first officer that he had “…put direct Cali for you in there.”

The captain, replied, “cleared the VOR DME to one nine, Rozo one arrival. will report the VOR, thank you sir.” The controller stated, “report uh, Tulua VOR.” The captain replied, “report Tulua.”

The Cali approach controller replied, “affirmative. take the Rozo one and runway one niner, the wind is calm.”

The captain responded, “alright Rozo, the Rozo one to one nine, thank you, American nine six five.”

At 2137, after passing ULQ , during the descent, the airplane began to turn to the left of the cleared course and flew on an easterly heading for approximately one minute. Then the airplane turned to the right, while still in the descent.

At 2139:25, Morse code for the letters “VC” was recorded by navigation radio onto the airplane’s CVR.

At 2140:01, the captain asked Approach, “and American uh, thirty eight miles north of Cali, and you want us to go Tulua and then do the Rozo uh, to uh, the runway, right to runway one nine?”

The flight responded, “OK, we’re thirty seven DME at ten thousand feet.” The controller stated at 2140:25, “roger. report (uh) five thousand and uh, final to one one, runway one niner.”

The CVR recorded the flightcrew’s conversations as well as radio transmissions.

At 2141:02, Cali Approach requested the flight’s altitude. The flight replied, “nine six five, nine thousand feet.” The controller then asked at 2141: 10, “roger, distance now?” The flightcrew did not respond to the controller.

At 2141:15, the CVR recorded from the cockpit area microphone the mechanical voice and sounds of the airplane’s ground proximity warning system (GPWS), “terrain, terrain, whoop, whoop.”

The captain stated, “Oh [expletive],” and a sound similar to autopilot disconnect warning began. The captain said, “…pull up baby.” The mechanical voice and sound continued, “…pull up, whoop, whoop, pull up.”

The wreckage path and FDR data evidenced that the airplane was on a magnetic heading of 223 degrees, nose up, and wings approximately level, as it struck trees at about 8,900 feet msl on the east side of El Deluvio.

The airplane continued over a ridge near the summit and impacted and burned on the west side of the mountain, at 3 degrees 50 minutes 45.2 seconds north latitude and 76 degrees 6 minutes 17.1 seconds west longitude.

Aeronautica Civil determines that the probable causes of this accident were: