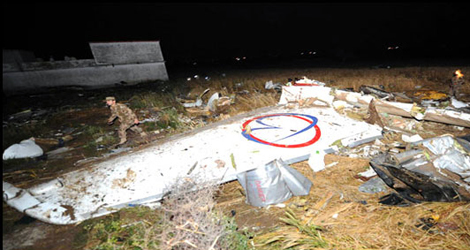 The aircraft had 127 souls onboard including 06 flight crew members. The Mishap Aircraft (MA) took off for Islamabad at 1705 hrs Pakistan Standard Time (PST) from Karachi. The reported weather at Islamabad was thunderstorm with gusty winds.

During approach for landing at BBIAP, Islamabad (OPRN), Flight BHO-213 was cleared by Islamabad Approach Radar for an Instrument Landing System (ILS) approach for Runway 30.

Bhoja Air flight BHO213 , while established on ILS (aligned with Runway 30 at prescribed altitude), at 6 miles to touchdown was asked by the Approach Radar to change over to Air Traffic Control (ATC) Tower frequency for final landing clearance.

After a few minutes, a call from a local resident was received in ATC Tower, stating that an aircraft had crashed close to Hussain Abad (A population around 4 nm short of runway 30 BBIAP, Islamabad).

It was later confirmed that Flight BHO-213 had crashed and all 127 souls onboard (121 passengers + 6 flight crew) had sustained fatal injuries along with complete destruction of aircraft.

The ineffective automated flight deck management was due to various factors including;

The cockpit crew incorrect decision to continue the flight for destination and non- adherence to Boeing recommended QRH and FCOM remedial actions / procedures due to non-availability of customized aircraft documents (at Bhoja Air) for Boeing 737-236A (advanced version of Boeing 737-200 series) contributed towards the causation of accident.

The inability of CAA Pakistan to ensure automated flight deck variance type training and monitoring requirements primarily due to incorrect information provided by the Bhoja Air Management was also a contributory factor in causation of the accident.