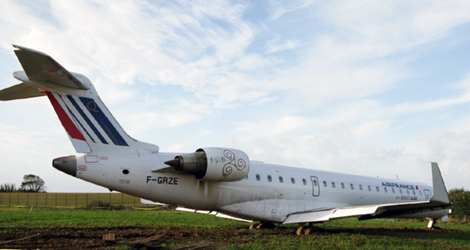 It was the fifth and last flight of the day. The captain was at the controls (PF).

At around 19 h 00 just before the descent, he reviewed the ATIS Whisky information indicating that runway 07 was active with a PAR procedure.

They asked permission to perform an ILS 25 (CAT I) approach and chose to make the landing in the flaps 30° configuration.

They announced they would use an airspeed reading of 140 kt, without specifying whether it was the approach airspeed (VAPP) or the reference airspeed (VREF).

The approach briefing was made by the co-pilot (PM) of Brit Air flight AF5937 saying: “Ok standard, I have no questions to ask you.“

The Descent checklist was carried out.

At around 19 h 10, the controller reminded the crew of the wind conditions and said “the runway is wet with puddles” and that the preceding aeroplane had encountered difficulties when landing due to a phenomenon “of aquaplaning“.
The PM shared this information with the PF.
Shortly afterwards, the controller stated there were showers at the aerodrome and that the visibility had decreased to 2,000 m.

At 19 h 12, the crew was cleared to descend to 3,000 ft. The PF asked the PM for the Approach checklist. The latter waited for the report from the cabin crew and, while waiting, reported the inconvenience caused by the screen displaying “Cabin Ready“.

At the same time, the controller stated that precipitation was heavy and would last about another hour. He stated that an inspection carried out half an hour earlier revealed that the runway was “wet with puddles”.

The BRIT AIR flight AF5937 crew received the report from the cabin crew and carried out the Approach checklist.

It was interrupted by the controller who transmitted the latest wind report (150°/17kt with gusts of 25 kt) and cleared the crew for the ILS 25 approach. The checklist was resumed without the altimeters being set.

The autopilot was engaged. The crew extended the landing gear, called out and displayed a VAPP of 140 kt and positioned the flaps at 30°. At 1,500 ft, they performed the landing checklist during which they readjusted the altimeters and wondered whether the approach checklist had been carried out.

One minute later, the controller cleared the crew for landing and gave a latest wind report (160°/14kt with gusts of 24 kt). The flight data recorder showed that at that moment the aeroplane was subject to a tailwind component of approximately 4 kt.

Descending through 1,000 ft radio altimeter height, the aeroplane was established on the ILS with a speed of 144 kt. The PF called out “Stable, continue approach”.

At 600 ft radio altimeter height, the crew saw the runway approach lights. The PF requested maximum speed for the windscreen wipers. For about ten seconds, the airspeed increased above 150 kt with a maximum of 155 kt. The aeroplane went through 500 ft radio altimeter height at a speed of 154 kt. The PM called out “ready, cleared” and the PF agreed. The AP was disconnected at 400 ft.

Around 200 ft radio altimeter height, the PF stated that he was “working with a high airspeed indicator slightly over”. The PM approved his choice. The airspeed was 147 kt.

At 150 ft, the aeroplane pitch attitude was 0° and began to gradually increase. Between 100 ft and touchdown, numerous roll inputs were recorded.

BRIT AIR flight AF5937 crossed threshold 25 at a radio altimeter height of 56 feet. The airspeed was 153 kt with a 4 kt tailwind.

The PM reported to the PF that visibility was bad and that the aeroplane was to the left of the runway centre line. Nine seconds later, the main landing gear touched the ground about 1,130 m from threshold 25.

The ground speed was 140 kt. The spoilers were extended. The crew deployed the thrust reversers and then applied “Max reverse” thrust. The aeroplane decelerated.

After nine seconds, the PF reported he could not brake. The aeroplane left the runway twelve seconds later at a ground speed of 66 kt. It hit the Localizer antennae before coming to rest approximately 200 m past the threshold of runway 07.

The BRIT AIR flight AF5937 crew made a distress call and ordered the evacuation of the aeroplane. The emergency services arrived at the accident site a few minutes later.

The accident was caused by the crew deciding not to abort the landing although they were not aware either of the degree to which runway conditions were contaminated or of the remaining length of runway available.

Continuing the landing can be explained by:

The following factors contributed to the incident: