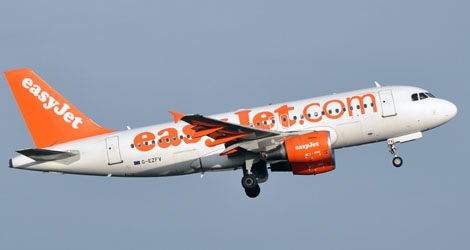 The Easy Jet flight EZY2016 was on a scheduled flight to London Luton Airport, from Faro, Portugal. The pilot flying (PF) was a captain-under-training (Capt U/T), occupying the left seat; the right seat was occupied by a training captain, who was the commander of the aircraft.

The flight was inbound to Luton from the south on the LOREL 4C standard arrival procedure. This procedure requires the aircraft to cross the extended runway centreline, before positioning for the Runway 26 ILS/DME approach from the north. When traffic allows, ATC will vector the aircraft towards the final approach course before the arrival procedure is completed, thereby shortening the track mileage to the landing.

The fight crew were familiar with the airport procedures and were prepared for this to happen.

The Easy Jet flight EZY2016 was given an early radar vector towards the final approach track and the PF increased the rate of descent to close the correct descent profile from above.

The aircraft was then allocated a heading of 220°, cleared to intercept the localiser and, once established, to descend on the glidepath.

The PF realised that the aircraft would be high and configured the aircraft with flap 2 and the landing gear down, to capture the 3º glideslope from above.

The Captain of Easy Jet flight EZY2016 armed the localiser mode and then attempted to arm the approach mode but inadvertently selected the EXPED pushbutton.

The expedite climb mode engaged but, to prevent a climb or any mode confusion and to regain the correct profile, the PF disconnected the autopilot and the autothrust. The aircraft passed through the localiser and ATC issued a revised heading to enable the aircraft to intercept from the south.

The PF of Easy Jet flight EZY2016 decided to continue flying the approach manually and the aircraft was established on the localiser at 5.5 nm. It was configured for landing, with full flap, at 5 nm.

The wind conditions were gusty and gave rise to some turbulence on the approach.

The VAPP (final approach) speed was 129 kt and at 50 ft RA the approach remained stable. Just below 50 ft there was a small nose-up pitch input followed by two nose-down inputs and, below 50 ft, the fight data indicated an increasing rate of descent from about 600 fpm to about 850 fpm. The data also showed that, below 100 ft RA, there were some left and right roll control inputs.

Below 30 ft, over the runway, both pilots sensed that the aircraft was sinking rapidly and both initiated a go-around.

The PF momentarily retarded the thrust levers to idle before advancing them to the TOGA (Takeoff and Go-around) position. At the same time, he made a full forward sidestick input, within one second, which was then rapidly reversed to full aft sidestick. As the PF made the forward sidestick input, the commander initiated an aft sidestick input which reached the full aft position within one second. He followed through the PF, pushing the thrust levers fully forward and announced “I HAVE CONTROL”. The aircraft made firm contact with the runway, on all three landing gear legs simultaneously, before lifting off and starting to climb. During this phase the PF relinquished control and reverted to the PNF role.

Easy Jet flight EZY2016 made firm contact with the runway before starting to climb. The normal acceleration recorded at touchdown was 2.99 g, which is classified as a Severe Hard Landing.

The commander remained as the PF, completed the go-around and subsequently carried out an uneventful landing on the same runway. There were no reported injuries.

Both pilots responded to an increased rate of descent approaching touchdown and each initiated a “TOGA 10” go-around. Their initial sidestick inputs were in opposition and, without the use of the takeover sidestick pushbutton, the net effect was a pitch-down control input. If the commander had operated the sidestick takeover pushbutton, his nose-up pitch input would not have been counteracted by the nose-down input of the Capt U/T. In the event, his control input reduced the effect of the nose-down input made by the Capt U/T.