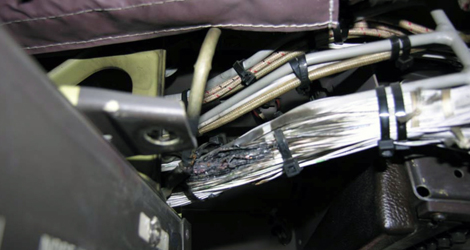 When they were on final approach on ILS 23 at Geneva airport, the crew of ATR 42-320 on cargo Farnair flight FAT6932 declared an emergency situation to air traffic control (ATC) because of a fire in the cockpit.

Despite this situation the aircraft was able to land normally and vacate the runway via rapid exit taxiway Charlie, on which it was forced to stop.

The co-pilot of Farnair flight FAT6932 reported the virtually total loss of all onboard systems to the controller and that they were no longer able to taxi on the ground.

The airport safety service (SSA), already on the spot, took charge of the aircraft and asked for the engines to be shut down.

The fire on board lasted for only a few seconds and external intervention was not necessary to fight the fire.

Technical aspects of the investigation :

Cause of the serious incident is due to an incipient fire caused by a short-circuit following several assembly defects.