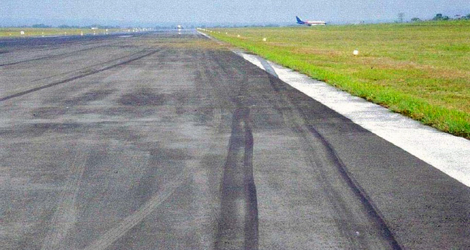 The flight crew member was three pilots which consist of Pilot in Command (PIC) acted as Pilot Monitoring (PM), First Officer (FO) who was under a line training acted as Pilot Flying (PF), Second in Command (SIC) a qualified FO acted as a third pilot occupied the pilot jump seat and 5 Flight Attendants (FA).

The pilots were able to see the runway at approximate 4 DME and continued the circling procedure by joined circuit pattern of runway 17.

When Garuda Indonesia flight GA292 turned on the base leg runway 17, the PM saw and assessed that the aircraft was above the normal glide path, turned too early and the aircraft was on the right of the centerline.

Realizing to the conditions, the PM decided to take over the control and continued the approach to land.

The PIC tried to correct the glide path by increasing the rate of descend (ROD), reducing the power and rolled to bring the aircraft aligned with the runway centerline.

At 0709 UTC, the aircraft touched down on runway 17 and was slightly deviated to the right of the runway centerline and stopped on the runway.

The ATC instructed the pilot to stop the aircraft and verified of a probability of a hard landing which was confirmed by the pilot. The FDR recorded vertical acceleration of 3.473 G.

There were no one injured in this occurrence.

During the circle to land approach, Garuda Indonesia flight GA292 was turned too early that might cause the aircraft higher above the normal approach path and not on the correct track and was taken over by the PIC. The approach was un-stabilized until below 300 feet and the absent of reminder from the other crew to go-around.

These actions inconsistent to the operator standard operating procedures as well as the CRM philosophy.