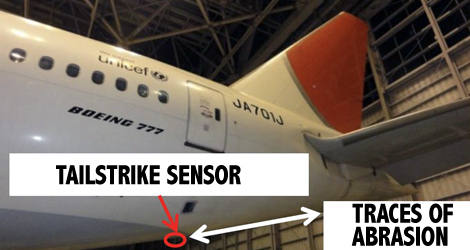 At around 16:08 Japan Standard Time (JST: UTC+9hr : unless otherwise stated all times are indicated in 24-hour clock JST), when Japan Airlines flight JL874 made go-around after touching down on the runway, the lower part of its aft fuselage made contact with the runway, and then damaged the airframe.

Afterwards, the aircraft landed at Tokyo International Airport at around 16: 35.

There were 308 people on board Japan Airlines flight JL874 , consisting of a captain, 11 crew members, and 296 passengers, but nobody sustained injuries.

The Aircraft sustained substantial damage, but there was no outbreak of fire

It is highly probable that Japan Airlines flight JL874 continued rolling with the pitch-up attitude after touchdown, causing the aft fuselage to come into contact with the runway and be damaged.

It is highly probable that the Aircraft continued rolling with the pitch-up attitude due to the following reasons:
after touchdown,

the PIC of Japan Airlines flight JL874 had felt that the Aircraft had bounced to the extent necessary for go-around, and judged to make go-around to avoid a hard landing, even after he became aware that the reverse thrust levers had been raised, he continued go-around; hence, it took time for the engine thrust to increase and he continued to pull his control column.

Became momentarily unclear, and the monitoring of flight information such as pitch angle and speed, which was the duty of PM, was not performed adequately.