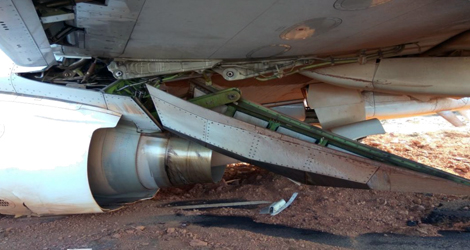 The flight was under the command of an ALTP holder with a CPL holder acting as First Officer. In addition to the cockpit crew, there were 154 passengers on board with five cabin crew manning the cabin.

The schedule departure of the flight was at 2310 UTC. The cockpit crew had reported for duty at 2220 UTC. The pre flight medical of the flight crew was carried out including the breath-analyser test. The test was satisfactory and the breath analysis was negative for alcohol.

The flight crew then proceeded to aircraft after self briefing and collection of the flight documents.
On the aircraft, the Cabin crew was briefed by the flight crew including the information that they will carry out a short taxi.

Flight crew had requested ATC for a pushback clearance at 2322UTC. ATC cleared the flight to line up on Rwy 26 by entering Taxiway N1 and backtracking.

At 23:22:54 UTC, the starboard engine was started followed by start of port engine at 23:23:54 UTC.
At 2331 UTC, when the aircraft was carrying out taxi, ATC gave departure clearance to the aircraft.
The aircraft was cleared to Mumbai at FL220. §Aircraft thereafter lined up on Rwy 26 after making a 180° turn at the dumbbell.

The crew completed the before take-off checklist and at 23:33:04 crew started pushing TLA to increase the thrust. As per the statement of crew, after taking TLA ahead of 40%, PIC pressed TOGA for takeoff.

As soon as TOGA was pressed, the aircraft started drifting towards right. Within 10 to 12 seconds of pressing TOGA, the aircraft went into unpaved surface. As per the crew, they tried to apply brakes, rudder and use NWS to steer the aircraft, but due to heavy bumps could not apply control effectively.

Jet Airways flight 9W2374 went out of control and continued into unpaved surface.

The aircraft stopped at a distance of 219 m from the runway edge and just short of periphery road. During this trail it had hit PAPI lights.

Engine had hit vertical pillar of 2.3 m height, located at 92.3 m abeam center line of Runway 26. The pillar has also damaged the left bottom portion of the fuselage. As per statement of Cabin Supervisor who was seated at L1 position, cabin crew had observed aircraft drifting to right very vigorously and shaking badly.

As soon as the aircraft came to stop, Cabin crew in charge of aft galley made an announcement on PA system asking passengers to remain seated.
In the meanwhile at 2235 UTC crew declared MAYDAY. Captain then came on PA and gave EVACUATE command.

The cabin crew tried to run to over-wing exits, but due to rush of passengers towards aft doors, she could not go ahead of 38th row. She was then instructed to evacuate from R2 door and assist passengers on ground. At 22:39 UTC crew informed ATC of having evacuated all passengers.

L1, L2, R1 and R2 cabin crew evacuated after evacuating all passengers, taking along the safety and medical kits. Co-pilot and subsequently Captain also evacuated the aircraft. The passengers were taken away from the aircraft by the cabin crew and made to gather close to a nearby post. A few passengers who were going towards tarmac were stopped and also instructed to gather at one place.

Probable cause of the Accident:

The PIC pressed TOGA when the thrust on no.1 engine was 40% and no.2 engine was 28% in deviation from SOP, which caused the No.1 engine thrust to increase at a faster rate than no.2 resulting in aircraft yawing towards right. In the absence of timely desired corrective actions including reject takeoff, the aircraft veered off the runway and continued to move in a semicircular arc on the undulated ground resulting in substantial damages to the aircraft.