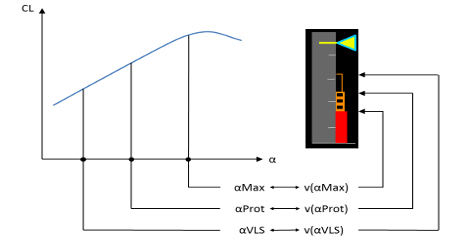 Lufthansa flight LH1829 took off from Bilbao for scheduled services at 0748 hrs1 with 109 persons on board. The co-pilot was Pilot Flying (PF) and the commander monitored the conduct of the flight. It rained during take-off. The airplane climbed through the cloud tops at approximately FL 200.

From 0757 hrs on, the recorded value for sensor #2 remained constant (4.6°) also. At 0803 hrs the crew received the clearance to fly directly to way point LATEK and the airplane turned to the new heading.

The commander of Lufthansa flight LH1829 stated he noticed the indications of the Alpha Protection Band in the Primary Flight Display (PFD) increasing unusually rapidly. The autopilot was in climb mode.

The co-pilot of Lufthansa flight LH1829 stated he then reduced the rate of climb from about 800 ft/min to 500 ft/min using the Vertical Speed button of the autopilot giving the airplane a chance to accelerate.

Approximately 45 seconds after the autopilot was disengaged the co-pilot of Lufthansa flight LH1829 verbalised the airplane’s limited reaction to his control inputs and therefore the commander took over the controls. At that time it had a rate of descent of about 4,000 ft/min and a pitch angle of -3.5°. The commander gave maximum backward sidestick input (pull) and the airplane’s nose began to rise, the rate of descent decreased, and the airplane entered horizontal flight attitude once more.

The flight was continued in FL 270. The commander gave continuously backward sidestick input (pull) of more than 50% of the possible input; altitude and attitude remained constant. The autopilots could not be engaged again and the trim was limited in nose up movements. The crew stated they made sure that the indicated airspeed was correct by checking the given values for pitch and power in the Quick Reference Handbook (QRH). Searching the QRH revealed that no procedure was described which would suit this situation.

The Flight Augmentation Computers (FAC) 1 and 2 were reset by the crew one after the other. The FDR showed that this did not change the situation.

At 0811:12 hrs the Aircraft Communications Addressing and Reporting System (ACARS) sent an automatically generated message to the technicians of the operator’s maintenance organisation. This message included the AOA values for the three Air Data Inertial Reference Units (ADIRUs).

At 0824 hrs the crew sent a telex to the technicians with a short description of the situation and the question whether an in-flight simultaneous reset of the FACs was possible. Three minutes later this was answered in the affirmative with the note that then the airplane would be in Alternate Law.

At 0831 hrs the crew wrote that a constant pull on the sidestick was necessary, that the trim was not available and that the AlphaProt Band moved very rapidly. In addition, the Centralised Fault Display System (CFDS) showed the failure message “PH6 AOA3”. The technicians suggested in a reply telex to retrieve the angle of attack values via the Multifunctional Control and Display Unit (MCDU) and, if necessary, to turn off the Air Data Reference unit (ADR) 3.

At 0836 hrs the crew turned off ADR 3. This did not change the situation and therefore the unit was turned on again. At 0852 hrs the crew received the following message: “…NACH SICHTUNG DER AOA WERTE, KOENNTE ES SEIN, DASS AOA1 UND AOA2 EINGEFROREN SIND UND EINEN ZU HOHEN ANSTROEMWINKEL MELDEN (After reviewing the AOA values it is possible that AOA1 and AOA2 are frozen and report a too high angle of attack). FALLS DAS PROBLEM WEITERHIN BESTEHT, ADR 1 UND ADR 2 AUSSCHALTEN, WAS ABER ZU ALTENATE LAW FUEHRT” (If the problem continues turn off ADR 1 and ADR 2 but that leads to alternate law). And at 0857 hrs: “…VIELLEICHT REICHT ES AUCH NUR DEN ADR 2 AUSZUSCHALTEN (Maybe it suffices to just turn off ADR 2). […]”

The LUFTHANSA flight LH1829 control system changed to Alternate Law. The continuous sidestick input was no longer necessary in order to keep the airplane in horizontal flight attitude.

The crew stated they decided to fly to the destination aerodrome and use the remaining flight time of about one hour to become familiar with the systems’ functions and prepare the landing.

At 0949 hrs the airplane landed safely at the destination aerodrome.