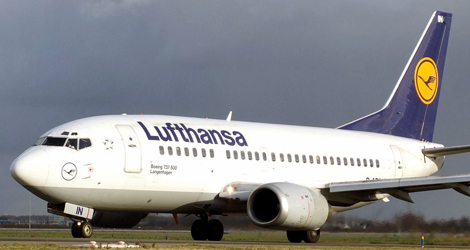 Lufthansa flight LH4019 was a flight from Turin, Italy, to Frankfurt/Main, Germany operated with a Boeing 737-300 , registration marks D-ABEA.

Five crew members and ninety passengers were on board.

Lufthansa flight LH4019 rolled 23° right and then left with a maximum bank angle of 62°.

At the time of the incident the autopilot was engaged, the flaps were extended in position 1 and the airplane had a speed of 200 – 210 kt. The autopilot counteracted the roll to the right.

During the subsequent stronger roll to the left, the autopilot was disengaged and the normal flight attitude recovered manually.

The approach of Lufthansa flight LH4019 was continued slightly above the glideslope until a safe landing.

The incident occurred in 2,700 ft approximately 9.8 NM prior to the threshold of runway 25L.

Preceding aircraft was a Boeing B747, assumed to have an approach mass of 278 t: Operating Empty Weight (OEW) 180 t, maximum payload 64 t, and fuel 34 t (20% of maximum fuel). In accordance with KUTTA-JOUKOWSKY (describes in aerodynamics the proportionality between dynamic lift and circulation) an initial circulation of 490 m2/s was calculated based on the approach speed of 90 m2/s. Using a calculation model the decay of the wake turbulence was calculated for calm atmosphere based on the data available. This resulted in a certain strength of the wake turbulence at a certain age.