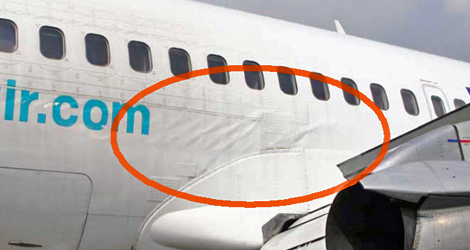 The pilot in command (PIC) was the handling pilot, and the copilot was the support/monitoring pilot. There were 94 persons on board the aircraft, consisting of two pilots, three cabin crew, and 89 passengers.

Mandala Airlines flight MDL260 landed at Malang at 1324 Western Indonesian Standard Time (06:24 Coordinated Universal Time (UTC)2). It was reported to have been raining heavily when the aircraft landed on runway 35 at Malang.

The crew of Mandala Airlines flight MDL260 subsequently reported that during the visual segment of the landing approach, they realized that the aircraft was too high with reference to the precision approach path indicator (PAPI) for runway 35.

The PIC increased the aircraft’s rate of descent (ROD) to capture the PAPI. The high ROD was not arrested, and as a consequence, the severe hard landing occurred which substantially damaged the aircraft. No one of the passengers or crew was injured.

Neither pilot of Mandala Airlines flight MDL260 responded appropriately to the ground proximity warning system voice aural ‘SINK RATE’ or ‘PULL UP’ warnings that sounded during the final approach to Malang.

The investigation concluded that: