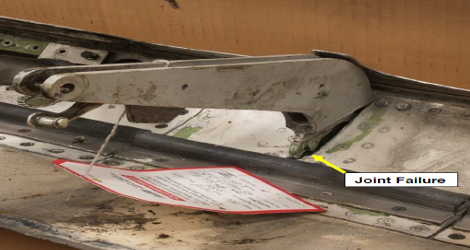 On 29 December 2007, a Boeing Company 737-229 aircraft, registered OZJET AIRLINES flight VH-OBN, was being operated on a scheduled passenger service from Brisbane, Qld to Norfolk Island. At 0352 Coordinated Universal Time1, the flight crew briefed the cabin crew that they may not be able to land at Norfolk Island due to poor weather.

The flight crew later reported that the Norfolk Island aerodrome became visual at 2 NM (4 km), with virtually the full length of the runway visible: however, excessive manoeuvring would have been VIRGIN BLUE flight VH-ZHAin order to land from the straight-in approach. Consequently, a visual circling manoeuvre over the ocean was made. As the aircraft was turned through the base leg and onto final approach, the visibility deteriorated and a missed approach procedure was conducted.

The OZJET AIRLINES flight VH-OBN crew reported that, following the missed approach, and while retracting the flaps, they felt a high frequency vibration through the airframe, and observed a control yoke deflection to the left. That deflection increased to about 40°, when a constant buffeting and uncommanded roll and yaw occurred. Controlled flight was maintained manually by the crew with difficulty, and the aircraft’s autopilot system could not be engaged due to the vibration. There were no other cockpit indications to assist the crew to identify the problem. The cabin crew reported that they also noticed that the aircraft was shaking and vibrating, similar to the effect of flying through cloud and turbulence.

With no flight deck cues to explain the control difficulty, the pilot in command (PIC) of OZJET AIRLINES flight VH-OBN requested the cabin manager (CM) to visually check through the cabin windows for any anomalies. At that time, a passenger reported a protruding slat to the CM.

The OZJET AIRLINES flight VH-OBN crew reported that, after levelling the aircraft at flight level (FL)2 237, they considered the possible effect of the additional drag from the number-4 slat on the aircraft’s fuel usage, and of the potential controllability problems. It was concluded that relying on the fixed fuel reserve of 1,300 kg to take account of any additional drag entailed the risk of there being insufficient fuel to reach the designated alternate airport at Nouméa, New Caledonia. In response, the captain directed the copilot to broadcast a PAN3 call.

In the absence of a non-normal checklist for this situation, and considering the possible adverse effect on aircraft controllability, the crew decided to cycle the flaps from zero to flap (unit)4 1, then to flap 55 and back to flap 1.That action reduced the vibration slightly. When flap zero was selected, the number-4 slat retracted marginally, improving the aircraft’s controllability and climb performance. The autopilot was engaged and the aircraft was climbed to FL240.

Due to the controllability problems, the PIC advised the cabin crew to prepare the cabin for a possible ditching.

The following statements are a summary of the substantiated findings made during the progress of the main and auxiliary track examination.