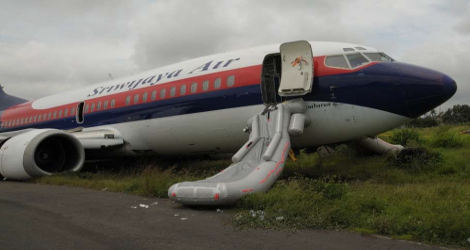 There were 141 persons on board; two pilots, four cabin crews and 135 passengers consisted124 adult, 7 children and 4 infant.

Sirwijaya Air flight SJ230 departed from Jakarta at 14.00 LT (07.00 UTC), the pilot in command was the pilot flying and the co-pilot was the pilot monitoring.

At 08.10 UTC the aircraft made holding at 8 NM from JOG VOR due to bad weather. After the second holding and the weather was deteriorated, the airport authority closed the airport for takeoff and landing.

The pilot requested divert to Juanda Airport (WARR), Surabaya and landed at 08.40 UTC.

After refuelling and received the information about weather improvement in Yogyakarta then the aircraft departed, at 09.20 UTC, in this sequence of flight the PIC acted as PF, with 137 persons on board consisted of two pilots, four cabin crews and 131 passengers consisted 120 adult, 7 children and 4 infant.

The aircraft was on the fifth sequence from seven aircraft approaching Adisucipto airport Yogyakarta.

Passing JOG VOR it was seen on radar screen that the aircraft speed was read 203 Kts at 2700 ft. Approach Controller instructed to reduce the speed.

At about 1200 ft, the pilot of Sirwijaya Air flight SJ230 had the runway insight and disengaged the autopilot and autothrottle.

The pilot made correction to the approach profile by roll up to 25 degrees and rate of descend up to 2040 ft per minute.

The GPWS warning of  ‘pull up’ and ‘sink rate’ were activated. Aircraft touched down at speed 156 Kts of 138 Kts target landing speed.

During landing roll, the auto-brake and spoiler activated automatically. The thrust reverser were deployed and the N1 were recorded on the FDR increase and decrease to idle before increased to 80% prior to aircraft stop.

The PIC noticed that the aircraft would not be able to stop in the runway and decided to turn the aircraft to the left.

Sirwijaya Air flight SJ230 stopped at 75 meter from the end of runway 09 and 54 meter on the left side of the centre line.

Most of the passenger evacuated through left and right forward escape slides. All passengers were evacuated safely. The passenger on the stretcher case was evacuated by the airport rescue.

6 passengers reported minor injured while all crew and the remaining passengers were not injured. The aircraft suffered major damage on the right main and nose wheel.