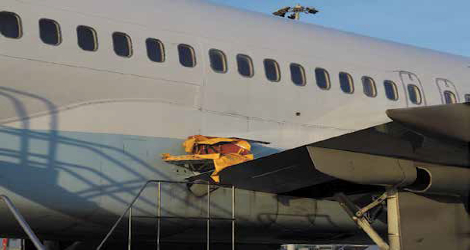 The Thomas Cook Airlines flight TCX1638 was on a scheduled fight from London Gatwick Airport to Hurghada Airport, Egypt.

During the takeoff run, at a reported 70 kt, the right wing slide advisory message appeared on the Engine Indication and Crew Alerting System (EICAS). The commander advised the co-pilot, who was pilot fying (PF), to continue the takeoff.

The crew reported that the aircraft handled normally during the takeoff and there were no other abnormal indications or symptoms. The crew decided they would continue with the departure and assess the situation when the aircraft was safely established in the climb. After the immediate departure procedures, they alerted the cabin manager and asked her if anyone had heard or seen anything unusual in the cabin.

They also completed the Quick Reference Handbook (QRH) procedure which, with the continued absence of any other indications, showed that no further action was required. The crew diagnosed that the warning was probably spurious and continued the climb.

Subsequently, they contacted company operations to alert them to the problem and this consultation resulted in the crew of Thomas Cook Airlines flight TCX1638 deciding to return to Gatwick Airport.

At this stage, the aircraft was approximately nine tonnes above the normal landing weight and, sharing the crews’ suspicion that the warning was probably spurious, the operator’s operations department advised the crew to hold and burn off fuel rather than carry out an overweight landing.

London ATC vectored the crew to an extended holding pattern where the crew of Thomas Cook Airlines flight TCX1638 used a combination of landing gear, flap and speedbrake to achieve a high drag and fuel-burn rate configuration. The crew did not declare an emergency.

After approximately 40 minutes of holding, ATC vectored the aircraft to a normal approach onto Runway 26L at Gatwick.

The aircraft was on base leg, descending to 3,000 ft at a speed of 188 kt with flaps 20 selected, when some of the cabin crew and passengers heard a number of bangs or felt a brief period of airframe “shuddering”. Two passengers reported seeing a white object detach from the aircraft on the right side. The cabin of Thomas Cook Airlines flight TCX1638 manager passed this information to the fight crew.

The crew established the aircraft on final approach and selected flaps 30. Shortly afterwards the commander noticed that the control yoke was offset to the left and commented that the autopilot seemed to be “struggling” to maintain wings level.

He disconnected the autopilot and took manual control of the aircraft. He reported that a “significant amount of left aileron” was required to maintain the centreline, although the aircraft remained fully controllable.

The commander landed the aircraft and taxied onto the parallel taxiway where the aircraft was shut down. Subsequently, following inspection by the fire and rescue service and engineers, it was discovered that the right over-wing slide had detached from the aircraft. The aircraft was then towed to a stand where the passengers were able to disembark normally. The total fight time was 2 hours 6 minutes.

Examination of the aircraft right over-wing escape slide carrier and its fittings indicated that a series of interrelated events occurred leading to the opening of the cover panel and deployment of the carrier. The marks within the grease of the tappet and slide assemblies, designed to hold the panel shut, show that only the rear tappet was properly engaged.

The forward marks show that the tappet was not engaged within the slot but was only in contact with the top surface of the slot. It also appears that its adjustment was such that the panel did not sit proud of the surrounding fuselage skin and therefore remained unnoticed by ground staff and crews doing visual inspections. It is possible that this existed for some time.

The last recorded specific right wing slide and panel maintenance took place in February 2013. More recently the left and right slide panel hinges were replaced as a precaution as part of the vibration diagnosis.

Boeing 757-300 feet-wide experience and manufacturer’s data shows that on a number of occasions the tappet and slot mis-engagement has resulted in the opening of the slide panel leading to carrier deployment in fight.

However, on this occasion this appears not to be the primary cause but would have increased the risk of opening in fight.

The absence of mechanical damage to the panel latches and the carrier locking device show that these items had become fully disengaged at the time of the incident. For this to happen the cranked handle, which as part of its movement withdraws the latches, must have moved upwards to the release position as it was found.

There are several possibilities for this to occur. Maintenance work was carried out on the slide gas bottle the night before the incident. Part of the preparatory procedure prior to carrying out the work was to make the gas pressure side of the actuation system safe by moving the vent lever to the open position.

This was carried out in accordance with the AMM. Then, following the AMM instructions, the team of engineers changed the gas bottle and re-established the slide gas system into the service condition by closing the vent lever and securing its access panel.

When carrying out this action the individual concerned did not recall touching or moving the crank handle. Furthermore he would not have needed to do so due to the position and design of the vent lever. None of the engineering staff involved at the time noticed anything unusual about the cranked handle or its position. However, with hindsight they were not completely sure that it was correctly positioned when later compared to diagrams in the AMM.

The possibility that the lever was inadvertently knocked towards the release position cannot be discounted.

However, had it been fully moved to the release position, the slide carrier panel would have opened slightly and been seen by the engineers. It would also have caused an immediate EICAS caution of r wing slide during pre-fight checks. However, it is possible it had only been partially moved such that it remained closed but in a position that it would require an additional factor to cause its continued travel.

It may therefore be concluded that the crank handle was not fully down in the safe position but was engaged enough to hold the panel and slide carrier in place.

The absence of the alignment markings on the panel, designed to indicate if a crank lever is not correctly secured, would have reduced the possibility of its mis-position being identified by the engineers. SB 757-25-0298 mandated under FAA AD 2012-01-09 introduces clearer crank handle position indication but it had not been incorporated on G-JMAB.

The lever and its mechanism were found to have a smooth and backlash free action but when compared to the left side crank handle required less force to initiate movement, ie it had a reduced breakout friction. In addition the No 6 loose screw jack right flap system, which is in close proximity to the slide cranked handle, had been causing high vibration and noise. As the handle required less force to move, it is possible that the fap system vibration and resonance resulted in a gradual movement upwards of the crank handle over a period of time to the point whereby it allowed the slide carrier and panel to open with its locking devices in the released condition.

Once open, it was in the air flow with the slide itself now no longer restrained within its pack. Thus it eventually unravelled in the slipstream failing about against the fuselage until its attachment material failed allowing it to detach and fall to the ground. There was no pre-existent damage or faults found with the slide and therefore it has no bearing on the incident.

On this occasion the slide had not contacted the tailplane.