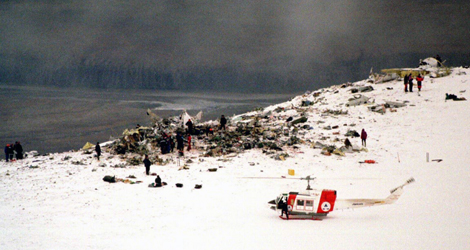 The aircraft was operating as Vnukovo Airlines flight VKO 2801 from Moscow to Longyear, with a crew of 11 and 130 passengers. All on board perished instantly.

The subsequent investigation has led to the conclusion that the aircraft was airworthy and that the crew was in control of the aircraft when it hit the ground. The accident took place in daylight under Instrument Meteorological Conditions (lMC).

The crew was well prepared for an Instrument Landing System (lLS) approach to runway 10. However, the traffic that morning was using runway 28 for take-off and landing, due to the wind direction.

Owing to limited knowledge of the English language, the crew had difficulty communicating their intention of making an approach to runway 10, which was within the aircraft performance criteria, to the AFIS officer (Aerodrome Flight Information Service) on duty.

In addition, the crew was not fully aware of the status of an AFIS officer compared to the authority of a Russian air traffic controller, with the result that the crew conceived the safety information given as an instruction.

Accordingly, the crew decided to use runway 28 for landing while the aircraft was descending to the initial approach altitude.

The navigator, in particular, became very busy preparing the new approach in addition to taking care of the pilot duties controlling the aircraft laterally and communicating with the AFIS.

The frequency 109.5 MHz for the localizer approach to runway 28 was set correctly. The rule requiring the setting of the landing course on the Horizontal Situation Indicator (HSI) was adhered to, and 283° was set instead of the approach course 300°.

Most probably the same course 283° was set on the GPS (Global Positioning System), which was being used as backup navigational aid.

In the base turn overshooting the approach centerline and rolling out on final, the crew showed a lack of situational awareness, being confused by differences in the instrument indications.

Instead of intercepting the approach centerline to correct for the aircraft being about 3 km to the right, the crew of Vnukovo Airlines flight VKO2801 continued with a slowly increasing right displacement until impact.

The interpretation of the CVR shows disagreement within the crew as whether to correct to the left or right. Descent was started without positive control of the lateral navigation. In spite of uncertainty as to whether they were approaching correctly or not, the crew did not discontinue the approach and climb to a safe altitude to solve the problem. The checks and the flight inspections of the ground navigational aids have not resulted in any indications of radiation anomalies within the ± 10° sector of the localizer authorized for use.

During initial approach and at a safe altitude, the radio altimeter warning had been activated several times, which meant that it was less than 750 m between the aircraft and underlying terrain.

Eighteen significant factors have been identified as leading the flight to the disaster.

For example, inadequate planning, unsatisfactory crew resource management and monitoring, a lack of a suitable procedure for offset localizer approaches in connection with an inappropriate rule requiring the landing course to be set instead of the localizer course, not solving navigational problems at a safe altitude, not discontinuing the approach when procedural uncertainties exist, a limited knowledge of the operating language and the actual airspace with respect to service given.