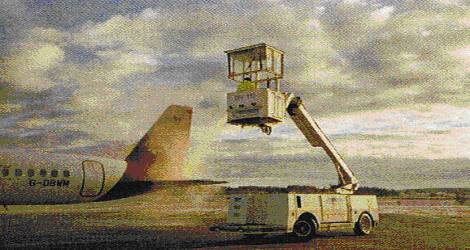 The Wizz Air flight W6524 incident took place during a flight between Västerås, Sweden and Poznan, Poland: the flight was operated with an Airbus A320-233 (registration HA-LPB).

During cruise of WIZZ AIR flight W6524 , over the southern part of the province of Småland, a strange smell arose on the flight deck.

The flight crew thought that the unfamiliar odour could perhaps cause incapacity and decided as a preventative measure to use their oxygen masks from time to time for the duration of the remaining flight to their destination. Two of the cabin crew and one passenger were at the same time afflicted by slight breathing difficulty and felt irritation in their eyes.

In order to alleviate the breathing difficulty, these people were supplied with oxygen from the portable oxygen bottles carried on the aircraft. An investigation showed that de-icing fluid had entered into and contaminated the aircraft air conditioning system during de-icing on the ground while the Wizz Air flight W6524 was at Stockholm/Västerås airport.

During the deicing of Wizz Air flight W6524 the fluid had evaporated and mixed with air supplied to the passenger cabin. The reason for the contamination of the air conditioning system was that the de-icing treatment had commenced before the aircraft had been prepared for de-icing and that the treatment had been applied without knowledge of the special requirements of this type of aircraft.

The cause of the incident was a deficiency in the use of standard phraseology in the communication between the ground staff and the commander.

Contributory were deficiencies in the airline’s follow-up and checking – by means of an agreement and audits – of the negotiated service’s quality and implementation.