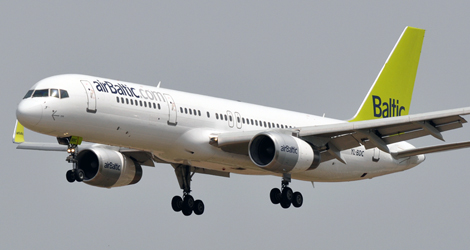 The crew declared readiness to descend from FL390 to FL170 and had issued clearance from ATCO descend to FL170 despite that the same time with opposite heading at FL 380 was cruising Virgin Atlantic flight VIR301.

Clearance was read back by the crew of Air Baltic flight BT165T and Boeing 752 started descending.

At 15:05:06 the two aircraft passed each other with opposite headings in the vicinity of LIEPAJA (N56:31:07; E021:05:31) in the RIGA Flight Information Region and the separation standard between the two aircraft was infringemented.

The crew of Virgin Atlantic flight VIR301 Airbus A340 received the traffic alert and collision-avoidance system (TCAS) resolution advisory (RA) to descend as a result of the Boeing 752, Air Baltic flight BGT165T traffic ahead of them.

The circumstances leading to this serious incident were following:

At the time of the incident, vertical separation between Air Baltic flight BT165T – Virgin Atlantic flight VIR301 decreased to 700 feet, horizontal separation was to 4.0 nautical miles.

The conflicting traffic was in sight for aircrafts crews, so Boeing 752, flight BTI65T and Airbus A340-600, Flight VIR301 passed each other by right side. Visual meteorological conditions existed at the time.

The source or origin of an event that played the major role that caused this incident was human factor – air traffic student controller error- the fact that the air traffic controller – student who handled an air traffic due to lack a experience did not estimate time of passing as well as did not predict consequences and issued instruction for BT165T to descend to FL 170 that potentially can lead to conflict between VIR cruising at FL 380 and BT165T cruising at FL390.