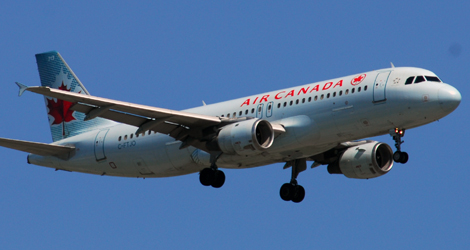 Air Canada flight AC433 was scheduled to depart Montréal at 0730.
As part of its pre-flight preparations, the flight crew performed an external inspection where nothing unusual was found. The aircraft logbook indicated that 6 litres of hydraulic fluid had been added overnight to the green hydraulic system. The entry included an instruction to monitor the quantity levels.

As per normal pre-flight preparations, the auxiliary power unit (APU) was started. Shortly thereafter, there was an odour in the cabin. Such odours are not uncommon and are often caused by engine washes or residue in the air conditioning system from the previous flight. The flight crew increased the cabin airflow and reduced the temperature. The smell soon dissipated and was not a problem for the remainder of ground operations. Shortly after takeoff, however, the odour returned.

Again, the crew of Air Canada flight AC433 increased airflow and reduced the temperature; the odour dissipated. While the aircraft was approaching the top of climb, the flight crew attempted to locate the source of the odour.

At that time, the electronic centralized aircraft monitor (ECAM) system alerted the crew to a low reservoir level in the green hydraulic system. The ECAM actions were completed, which included turning off the hydraulic power transfer unit (PTU) and the green system engine driven hydraulic pump.

The crew then verified these actions in the Quick Reference Handbook. At that time, the flight was almost half way to Toronto, Ontario, where the weather was more favourable than in Montréal. A decision was made to continue to destination.

Due to the green hydraulic system being de-energized, several systems were inoperative, including:

With systems inoperative, the aircraft would have to stop on the runway and be towed to the gate. The crew advised air traffic control and company maintenance. Aircraft Rescue and Firefighting (ARFF) was placed on standby. The crew briefed the passengers.

Following an emergency extension of the landing gear, the aircraft made an uneventful landing on runway 05 and came to a complete stop.

Aircraft rescue personnel conducted an infrared and visual inspection; no anomalies were discovered. The flight crew started the APU, shutdown both engines and waited for company maintenance personnel and a tow vehicle to arrive.

Company procedure calls for all passenger, cargo and service doors to be closed before towing an aircraft. The landing gear doors on the aircraft were open, as the green hydraulic system, which would normally close them, was de-energized.

The tow vehicle operator asked that the gear doors be closed. Extension of the landing gear on approach caused hydraulic fluid to be returned to the reservoir, which was back in normal range. After conferring with maintenance personnel, it was decided to reenergize the green hydraulic system in order to close the gear doors. As such, the flight crew turned on the electric hydraulic pump and PTU.

Previous actions were reversed and the pump was turned off. Both left side passenger doors (L1 and L2) were disarmed and opened in an attempt to clear the smoke from the cabin. This did little to dissipate the smoke, as it continued to enter the cabin through the air vents.

Passengers became uneasy and a few made their way towards the open doors.

The service director stationed at the L1 door called the flight crew to inform them of the situation, whereupon the captain ordered an evacuation. The cabin crew stationed at doors L1 and L2 closed the doors to rearm the emergency slides. All 4 doors were then opened and the slides were deployed. The passengers seated next to the 4 over-wing emergency windows opened their exits and the slides were deployed.

The flight attendants commanded the passengers to leave everything behind and evacuate via the nearest exit; these instructions were also included on the passenger safety cards.

Several passengers brought carry-on baggage and personal belongings to the exits. Some were again instructed to leave their baggage behind, while others were allowed to exit with their items to prevent blockage of the exits.

The evacuation was completed in approximately 2 minutes. As the evacuation progressed, the slides began to become damp from light rain. Two passengers who exited the aircraft with their baggage reported having received minor injuries, including scraped knuckles and sore backs. Two crew members, whose responsibilities required the carriage of emergency equipment, were the last to evacuate. They also hurt their backs exiting via the slide. As the temperature was 3°C with light rain, the crew gathered the passengers together to await a bus to transport them to the terminal. Many passengers had taken their carry-on baggage because they were travelling on business and were concerned about the delay, while others were worried about making connections onto other flights.