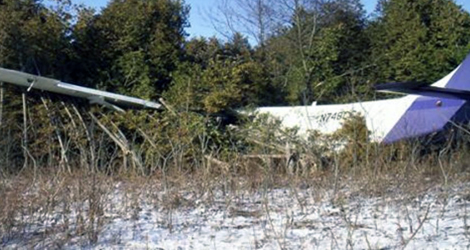 He rejected the landing and conducted a go-around procedure.

The aircraft became airborne, but it started to descend as it flew over lower terrain, striking an airport boundary fence.

It continued until it struck rising terrain and then a line of forestation, where it came to an abrupt stop.

The flight crew of Air Cargo Carriers flight SNC2917 exited the aircraft and waited for rescue personnel to render assistance. The aircraft was substantially damaged, and both pilots sustained serious injuries.

There was no post-crash fire.