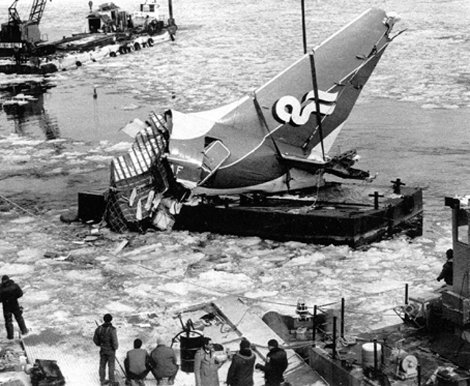 There were 74 passengers, including 3 infants, and 5 crewmembers on board. The flight’s scheduled departure time was delayed about 1 hour 45 minutes due to a moderate to heavy snowfall which necessitated the temporary closing of the airport.

Following takeoff from runway 36, which was made with snow and/or ice adhering to the aircraft, Air Florida flight QH90 at 16:01 e.s.t. crashed into the barrier wall of the northbound span of the 14th Street Bridge, which connects the District of Columbia with Arlington County,” Virginia, and plunged into the ice-covered Potomac River.

Air Florida flight QH90 came to rest on the west side of the bridge 0.75 nm from the departure end of runway 36.

Four passengers and one crewmember survived the crash. When the aircraft hit the bridge, it struck seven occupied vehicles and then tore away a T section of the bridge barrier wall and bridge railing.
Four persons in the vehicles were killed; four were injured.

The National Transportation Safety Board determines that the probable cause of Air Florida flight QH90‘s accident was :

Contributing to the accident were the prolonged ground delay between deicing and the receipt of ATC takeoff clearance during which the airplane was exposed to continual precipitation, the known inherent pitch-up characteristics of the B-737 aircraft when the leading edge is contaminated with even small amounts of snow or ice, and the limited experience of the flightcrew in jet transport winter operations.