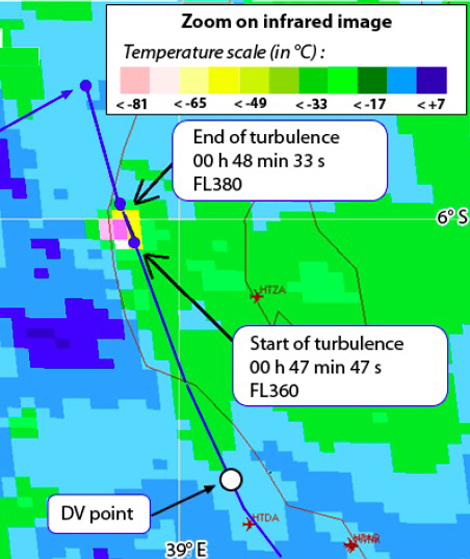 Air France flight AF3575 took off from Antananarivo airport (Madagascar) at 22 h 45 bound for Paris Charles de Gaulle. At 23 h 10, they received an ACARS message describing the 22 h 30 satellite images. They concluded that they would encounter highly convective zones up to parallel 12°30 ‘S, and that these zones would be more isolated up to DV point (see Figure) and, after this point, that they would not encounter any turbulence until parallel 2°30 ‘S.

Several avoidance manoeuvres were performed by Air France flight AF3575 when crossing highly convective zones. Ten minutes after passing parallel 12°30 ‘S, the pilot flying (PF) changed the range of his navigation display (ND) from 40 NM to 160 NM: the ranges of the two NDs were then set to 160 NM. The crew indicated that the sky was clear with stars visible.

Crew of Air France flight AF3575 stated that they adjusted the tilt (the angle between the horizontal and the middle of the radar beam) on the weather radar to -1.5° and that they regularly changed this setting as well as the gain setting in order to monitor the cells. While the aeroplane was cruising at FL360, the Dar es Salaam controller asked the crew twice to climb to FL380.

The crew refused in order to maintain a sufficient margin in relation to the recommended maximum flight level (REC MAX). Autopilot and autothrust were connected. The flight directors (FD) were displayed. ALT and NAV modes were active and autothrust was in SPEED mode.

Approximately six minutes after passing DV point, the Mach was 0.81 and began to increase. The PF changed the range of the ND from 160 NM to 80 NM and said he selected a -1.5° tilt. He saw a flash and then a cloud on the right side of the aeroplane. He did not see any return on the weather radar screen. The Mach reached 0.83. The crew selected Mach 0.8 and then 0.78 and extended the speedbrakes for about fifteen seconds. The Mach went down 0.79 and then went back up to about 0.82. After that the crew saw a flash ahead and then felt strong turbulence.

The PNF indicated he was turning on the seat-belt signs requiring the passengers to fasten their seatbelts.

In the turbulence, the angle of attack of Air France flight AF3575 increased until it led to autopilot disconnection. The PF called out “AP OFF” and took over the controls.

While passing through the convective zone, the Air France flight AF3575 climbed despite the PF’s mainly nose-down inputs. The autopilot was re-engaged but disconnected automatically. The autothrust disconnected automatically. The PNF, seeing that the PF was very busy maintaining the flight path, decided to disconnect autothrust and selected an N1 value of 90%. He was not aware that the device was already disconnected. The crew stabilized the aeroplane at FL380, the maximum level reached during the turbulence and began to descend 10 seconds later. The PF re-engaged the autopilot and the rest of the flight was uneventful.

During the severe turbulence, which lasted about forty seconds:

The manufacturer stated that the aeroplane remained within its flight envelope throughout the entire event.

The lack of any onboard means or tools available to the CCO, which would allow more reliable and effective detection of cells that are forming, contributed to the incident.

Inappropriate adjustment of the range on the ND meant that the crew did not have optimal detection conditions.

Taking into account the extremely rapid development of the storm cell, it is not certain whether such detection may have been possible without active monitoring of the onboard weather radar when approaching the turbulent area.

The crew’s appropriate inputs on the flight controls helped maintain control of the aeroplane in flight conditions that had suddenly become very difficult.