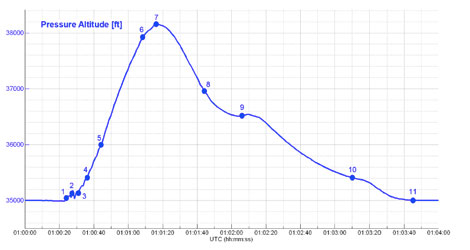 The Air France flight AF471 took off from Caracas-Maiquetía Simón Bolívar airport at 23 h 38 for Paris Charles de Gaulle. The captain was PF.
At 23 h 52, climbing through FL180, the PF and the PNF both set the range of their Navigation Display (ND) to 320 NM.
Between 0 h 28 and 0 h 47, the PNF modified the range of his ND several times between 20 and 320 NM, and then kept the latter adjustment.
The crew indicated that the weather radar, set to maximum gain and a tilt between -0.5° and -1°, did not detect any precipitation.
The aeroplane was stable at FL350, in clear air, and at a cruise Mach of 0.83. Autopilot (AP) n°1 and the auto-thrust (A/THR) were engaged. The weather radar mode was set to “WX”.
At 1 h 00 min 24, about 2 NM after passing coordinates 18N 60W, the aeroplane entered a zone of moderate turbulence.
The overspeed warning (“OVERSPEED”) was triggered and the “Master Warning” warning light came on.
The crew stated that they were very surprised by this warning. Mach reached 0.87.
At 1 h 00 min 27 , the PNF manually disengaged the AP by pressing the takeover pushbutton on the side-stick.
A pitch-up input on the PNF’s side-stick going as far as to stop was recorded for 6 seconds. This input was accompanied by an input to bank to the right then left. The PNF stated that he did not remember these inputs.
From the start of the pitch-up input , the high angle of attack protection was activated several times (see the detail of the activation periods in the appendix).
At 1 h 00 min 28, Mach was 0.84 and the OVERSPEED warning ceased for 2 seconds. It reappeared again for one second, and then disappeared again. The aeroplane climbed at a vertical speed of 1,950 ft/min.
At 1 h 00 min 30, the “Master Warning” warning light went off. The crew selected a Mach of 0.76 for 3 seconds, then 0.85.

At 1 h 00 min 31 (point n°3), the PF extended the speedbrakes. Mach was 0.84 and started to decrease 2 seconds later.
The PF indicated that in the seconds that followed, he switched on the lights and noticed being in IMC and that there was precipitation.
He also indicated that he turned round to put his meal tray on the seat behind him and to take the Public Address handset to make a passenger and cabin crew announcement.
The handset slipped from his hands. The PNF recovered it and used it to make the announcement.
At 1 h 00 min 32, the altitude went above 35,200 ft. The crew stated that they did not remember hearing the “Altitude alert” warning, which is triggered if the current altitude is 200 ft above the selected altitude. Pitch attitude increased, moving from 3° to 9° in 5 seconds.

The PF stated that he had noticed that the speed was low. Shortly afterwards, at 1 h 00 min 47, the crew selected Mach 0.93.
The aeroplane was still climbing with a vertical speed which reached a maximum of 5,700 ft/min. The crew was not aware of this. The N1’s were at 100%.

The PF stated that he noted with surprise that altitude was 38,000 ft and asked the PNF if they were cleared for FL350.
At 1 h 01 min 42, while the aeroplane descended past 37,000 ft and the selected altitude was 35,000 ft, the PF pulled the altitude selection knob (ALT knob), which engaged the OPEN DES longitudinal mode.

The PF stated that he wanted to order the AP to re-descend to FL350, but that “nothing was displayed on the PFD”.
The indicated airspeed was 226 kt, or 19 kt below VLS. The 2 flight directors (FD) then disappeared.
At the same time the PNF carried out transmissions for one minute on HF1 with the New York en route control centre in order to inform them of the level bust and the turbulence encountered.
At 1 h 02 min 06 , the aeroplane descended past 36,520 ft. The PF then became aware of the disengagement of the AP and made a pitch-down input on his sidestick. Pitch attitude began to decrease 2 seconds later.
From 35,400 ft, the PF re-engaged AP1, altitude stabilised at FL350 , and A/THR was re-engaged.
At 1 h 25 min 38, an ACARS message received from the Air France OCC indicated that there was nothing visible 10 NM north of the 18N 60W position on the satellite photo at 1 h 00 and that no clear air turbulence was forecast at that point either.

The flight continued without further incident to Paris-Charles de Gaulle airport, where the crew landed at 8 h 33.