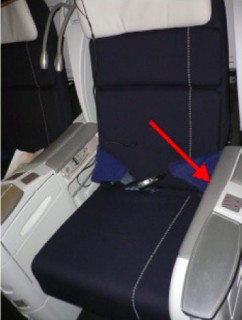 The crew took off from Atlanta Hartsfield on a flight bound for Paris Charles de Gaulle airport. In cruise at FL 380, a cabin crew member noticed a smell chracteristic of an electrical fire at the level of seat 4F in Business Class.

He turned off electrical power to the general video system, removed the seat covering and noticed the presence of flames.

He later explained that he had extinguished the fire by reflex by throwing water onto the flames. A cabin crew member checked that the fire did not start again and the flight continued without further incident.

The seats in Business Class installed on F-GSPK were convertible into sleepers with the aid of an electrically controlled mechanism. On the ground, during dismantling of the seat, a spare external battery from a passenger’s electronic device was found severely damaged in the structure of the seat.

It showed traces of fire.

This Lithium–Polymer-type (Li-Po) battery has a capacity of 1 Ah and delivers 5 V and 500 mA. It is intended to extend the capacity of electronic equipment such as mobile phones, tablets, audio equipment etc.

The battery was crushed in the slide identified on the photo above. It is possible that it slipped under the seat covering, behind the armrest or down the side of the seat.

The fire in the cabin was due to the crushing of a lithium battery that fell into a seat mechanism.

The crushing caused an internal short-circuit and overheating that caused the fire.

Turning off the video system electrical power supply before any other action was an effective protection against the risks associated with the many items of equipment installed in the seats. The cabin crew member then put out the fire by reflex by throwing water onto the flames. Throwing the water put out the flames and cooled the damaged battery.

Nevertheless, this could have revived the fire and made its extinction more difficult, due to the release of hydrogen generated by the reduction of lithium in the water.

The new procedure put in place by Air France that recommended initial use of halon resolved this difficulty but implied the emission of a potentially noxious gas that is bad for health.

Its use in the cockpit could clearly be dangerous. In the United States, the FAA recommends a slightly different procedure: it suggests turning off the electrical power supply, putting out the flames with halon or water, then cooling the device in order to stop internal reactions.

No procedure has been universally established to contain this type of fire in the cabin or the cockpit.