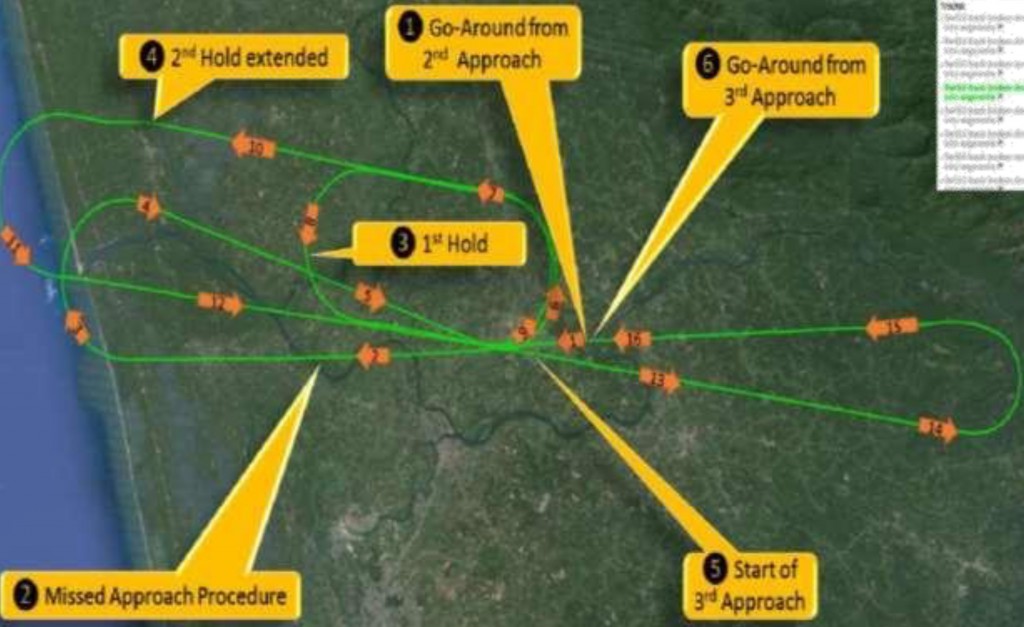 Jet Airways flight IX374 was operated on 17/08/2015 with a Boeing B737-800 aircraft registration VT-JFA. The flight was a Doha-Cochin sector . Both the operating crew were duly qualified on type B737 aircraft to operate the flight. There were 142 passengers and 08 crew members on board the aircraft.

The flight from Doha to Cochin was uneventful, however due to presence of low clouds below decision altitude (DA) in approach path at Cochin, the crew of Air India Express flight IX374 carried out three go-around as visual contact with runway could not be established.

The flight crew of 9W-555 could not establish visual contact with the runway at Minimum Decision Altitude (MDA), carried out a go-around and declared “MAY-DAY” due fuel. After declaring “MAY-DAY” the PIC requested ATC for permission to carry out visual approach for runway 14.

Thereafter the crew of Air India Express flight IX374 made two more visual approaches for runway 14 and, however failed to establish visual contact with the runway and carried out go-around.

Thereafter the PIC requested ATC to take left 180° turn to self-position for inbound runway 32 at 700 feet. This activated EGPWS caution “TERRAIN TERRAIN” followed by EGPWS warning “TERRAIN TERRAIN PULL UP”. The aircraft finally landed safely on runway 32 on the 7th attempt at 0139 UTC.

After engine shut down fuel on board was 349 Kgs.

Cause of the accident was identified as :