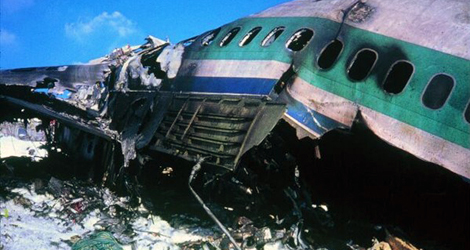 In preparation for Air New Zealand flight TE901 (also known as the Mt.Erebus crash) two of the pilots attended a route qualification briefing. This briefing consisted of an audio visual presentation, a review of a printed briefing sheet and a subsequent 45 minute flight in a DC 10 flight simulator for each pilot to familiarise him with the grid navigation procedures applicable to the portion of the flight south of 60° south latitude and the visual meteorological conditions (YMC) letdown procedure at McMurdo. This briefing was completed 19 days prior to the scheduled departure date. The briefing gave details of the instrument flight rules (IFR) route to McMurdo which passed almost directly over Mt Erebus, a 12450 ft high active volcano, some 20 nm prior to the most southerly turning point, Williams Field. It also stated that the minimum instrument meteorological conditions (IMC) altitude was 16000 ft and the minimum altitude after passing overhead McMurdo was 6000 ft providing conditions were better than certain specified minima well in excess of the standard VMC in New Zealand.

On the day of the flight the crew participated in a normal pre-flight dispatch planning. At 1917 hours (Z) on 27 November 1979 Air New Zealand flight TE901, a DC I0-30 (ZK-NZP) departed from Auckland Airport on a non-scheduled domestic scenic flight which was planned to proceed via South Island New Zealand, Auckland Islands, Baleny Island, and Cape Hallett to McMurdo, Antarctica then returning via Cape Hallett and Campbell Island to Christchurch its first intended landing point.

The flight was dispatched on an IFR computer stored flight plan route. The flight deck crew consisted of the captain, two first officers and two flight engineers. Beside the fifteen cabin crew there was an official flight commentator on the flight who was experienced in Antarctic exploration. The passenger load was reduced by 21 from the normal passenger seating capacity as a deliberate policy to facilitate movement about the cabin to allow passengers to view the Antarctic scenery.

In a discussion with the McMurdo meteorological office at 0018 hours (Z) the aircraft crew of Air New Zealand flight TE901 was advised that Ross Island was under a low overcast with a base of 2000 ft and with some light snow and a visibility of 40 miles and clear areas approximately 75 to 100 run northwest of McMurdo. At approximately 0043 hours (Z) Scott Base advised the aircraft that the dry valley area was clear and that area would be a better prospect for sightseeing than Ross Island. In response to the message that the area over the Wright and Taylor Valleys was clear the captain asked the commentator if he could guide them over that way. The commentator said that would be no trouble and asked if the captain wished to head for that area at the time. The captain replied he “would prefer here first”.

The US Navy Air Traffic Control Centre (ATCC) “Mac Centre” suggested that the aircraft crew take advantage of the surveillance radar to let down to 1500 feet during the aircraft’s approach to McMurdo and the crew indicated their acceptance of this offer. In the event however the aircraft was not located by the radar equipment prior to initiating its descent (or at any other time). The aircraft crew also experienced difficulty in their attempts to make contact on the very high frequency (VHF) radio telephone (R/T) and the distance measuring equipment (DME) did not lock onto the McMurdo Tactical Air Navigation System (TACAN) for any useful period. The aircraft was relying primarily on high frequency (HF) R/T during the latter part of its flight for communication with the ATCC.

The area which was approved by the operator for VMC descents below 16000 feet was obscured by cloud while Air New Zealand flight TE901  was approaching the area, and the crew elected to descend in a clear area to the north of Ross Island in two descending orbits the first to the right and the second to the left. Although they requested and were granted a clearance from “Mac Centre” to descend from 10000 to 2000 feet VMC, on a heading of 180 grid (013°) and proceed “visually” to McMurdo, the aircraft only descended to 8600 feet before it completed a 1800 left turn to 375° (1900T) during which it descended to 5,700 feet.

Air New Zealand flight TE901 descent was then continued to 1500 feet on the flight planned track back toward Ross Island.

Shortly after the completion of the final descent the aircraft collided with Ross Island.
The Air New Zealand flight TE901 ‘s ground proximity warning system (GWPS) operated correctly prior to impact and the crew responded to this equipment’s warning by the engineer calling off two heights above ground level, 500 and 400 feet, and the captain calling for “go round power”.

The aircraft’s 3 engines were at a high power setting and the aircraft had rotated upwards in pitch immediately prior to impact. The aircraft collided with an ice slope on Ross Island and immediately started to break up. A fire was initiated on impact and a persistent fire raged in the fuselage cabin area after that section came to rest.

The accident occurred in daylight at 0050 hours (Z) at a position of 77°25’30” S and 167°27’30” E and at an elevation of 1467 feet AMSL. The cockpit voice recorder (CVR) and digital flight data recorder (DFDR) established that the aircraft was operating satisfactorily and the crew were not incapacitated prior to the accident.

The descent was intentionally continued below the VMC limit specified by CAD and Air New Zealand Limited, of 6000 feet to an indicated 1500 feet.

The probable cause of this accident was the decision of the captain to continue the flight at low level toward an area of poor surface and horizon definition when the crew was not certain of their position and the subsequent inability to detect the rising terrain which intercepted the aircraft’s flight path.

Editor’s note : there are a few websites about Air New Zealand flight TE901 crash, one of these (link here) is hosted and maintained by the New Zealand Air Line Pilots’ Association (NZALPA)