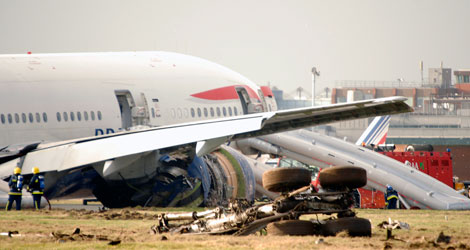 British Airways flight BA38 was on approach to London (Heathrow) from Beijing, China, at 720 feet agl, the right engine of G-YMMM ceased responding to autothrottle commands for increased power and instead the power reduced to 1.03 Engine Pressure Ratio (EPR). Seven seconds later the left engine power reduced to 1.02 EPR. This reduction led to a loss of airspeed and the aircraft touching down some 330 m short of the paved surface of Runway 27L at London Heathrow.

The investigation identified that the reduction in thrust was due to restricted fuel flow to both engines.
It was determined that this restriction occurred on the right engine at its Fuel Oil Heat Exchanger (FOHE). For the left engine, the investigation concluded that the restriction most likely occurred at its FOHE. However, due to limitations in available recorded data, it was not possible totally to eliminate the possibility of a restriction elsewhere in the fuel system, although the testing and data mining activity carried out for this investigation suggested that this was very unlikely. Further, the likelihood of a separate restriction mechanism occurring within seven seconds of that for the right engine was determined to be very low.

The investigation identified the following probable causal factors that led to the fuel flow restrictions: