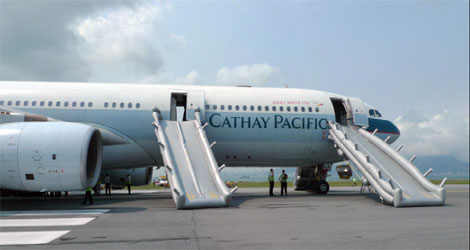 CATHAY flight CPA780 declared “MAYDAY” when approaching Hong Kong International Airport (VHHH) with control problem on both engines. The aircraft landed at a groundspeed of 231 knots, with No. 1 engine stuck at about 70 % N1 and No. 2 stuck at about 17 % N1. Five main tyres were deflated after the aircraft came to a complete stop on Runway 07L of VHHH.

57 passengers and six cabin crew were injured during the evacuation

After being advised by the rescue leader that there was fire and smoke on the wheels, the Commander initiated an emergency evacuation of passengers. A total of 57 passengers and six cabin crew were injured during the evacuation. Most of them sustained minor injuries and were given medical treatment immediately at the airport. Ten of them were sent to hospitals for medical treatment with one passenger suffered from bone fracture and ankle joint dislocation. Before departure for VHHH, the accident aircraft had uplifted 24,400 kg of fuel at Juanda International Airport, Surabaya, Indonesia (WARR).

The accident was caused by fuel contamination. The contaminated fuel, which contained SAP spheres, uplifted at WARR subsequently caused the loss of thrust control on both engines of the aircraft during approach to VHHH.

The following chain of events and circumstances had led to the uplift of contaminated fuel to CPA780: