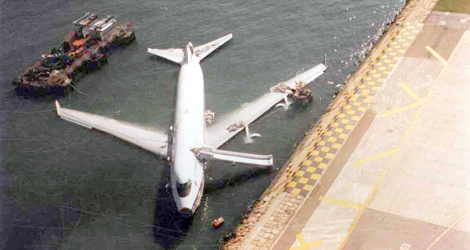 China Airlines flight CAL604 was a flight from Taiwan to Hong Kong international airport operated with a Boeing B747-409B (B-165) operated on 04th November 1993.

On the day of the China Airlines flight CAL605 accident, Hong Kong International Airport (HKIA) was affected by a tropical cyclone centred some 300 kilometres south-southwest of Hong Kong. There was a strong gusty wind from the east. It was raining and the runway was wet.

China Airlines flight CAL605 carried out an Instrument Guidance System (IGS) approachto runway 13.  As it commenced the visual right hand turn onto short final it encountered windshear characterised by a sustained reduction in airspeed and an abnormally high sink rate. The commander continued the approach and landed slightly faster than he had intended but within the normal touchdown zone.

Soon after touchdown a period of undesired wingrocking commenced and selection of reverser thrust was postponed until roll control was regained. Heavy wheel braking and reverse thrust were then applied but the retardation was insufficient to stop the aircraft within the remaining runway distance. A turn to the left was initiated shortly before the aircraft ran off the runway at an angle to the left of the centreline at a ground speed 30 kt.

The nose and rightwing of China Airlines flight CAL605 dropped as it departed the runway promontory and it entered the sea creating a very large splash which was observed fromthe controltower, some 3.5 km to the northwest.

China Airlines flight CAL605 was subjected to peak lateral winds of up to 39 Kts between 100 and 50 ft height during the approach.

The Air Movements Controller (AMC) immediately activated the crash alarm and the Airport Fire Contingent responded very rapidly in their fire appliances and fire boats. Other vessels in the vicinity also provided prompt assistance. On impact with the sea significant structural damage was incurred by the engines on the right wing, one of which separated, and by the nose section surrounding tbe lower passenger cabin. China Airlines flight CAL605 remained afloat and drifted back towards the runway. Evacuation started shortly after the aircraft came to rest and all 296 persons onboard were rescued. Of the 10 injured, only oneperson was categorized as ‘serious’ per ICAO definition, having been hospitalised for more than 48 hours. (He was discharged 5 days later.)

The aircraft was salvaged from the sea some two weeks after the accident but it was beyond economic repair.