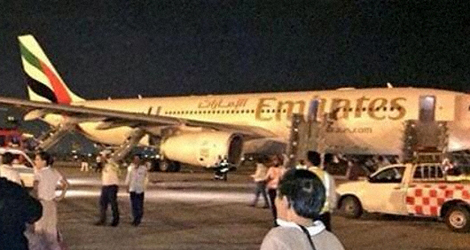 As preparations for departure were completed the flight of Emirates flight EK609 crew sensed an odor accompanied by a yellow hydraulic system low pressure indication on the electronic centralized aircraft monitoring (ECAM) system.

The leaking hydraulic fluid entered the auxiliary power unit (APU) of Emirates flight EK609 from where it entered the airconditioning system.

Examination of the hose concluded that the cause of the fracture was, most probably, fatigue failure of the metal braiding, followed by fracture of the hose PTFE core pipe. The mist filled the cockpit and cabin and caused difficulty in breathing, throat discomfort, and eye irritation for some occupants.

In an attempt to determine the source of the mist, which was perceived as smoke, the cabin crew member of Emirates flight EK609 located at the L3 door handed a fire extinguisher and protective breathing equipment (PBE) to the cabin crewmember stationed at door L1A, and after the latter had donned the equipment and pulled the lanyard to activate the PBE oxygen generator, the PBE caught fire.

The crewmember removed the PBE immediately and threw it on the floor next to the L3 door. This caused a localized fire that was suppressed by other crewmembers. Based on initial information, the Commander decided to return the Aircraft to the stand and disembark the passengers and crew using steps.

The Commander of Emirates flight EK609 requested information about the situation in the cabin from the L4 cabin crewmember, who stated that visibility in the cabin was now limited to four rows.

Following the evacuation, the passengers of Emirates flight EK609 stayed close to the Aircraft as they were not given directions as to what to do or where to go. On becoming aware of the evacuation of the Aircraft, ATC did not issue any instruction to halt airside operations, and several aircraft and vehicles continued moving.

The AAIS determined that it is probable that manufacturing defects in the PBE candle caused the candle to ignite abnormally when the cabin crewmember pulled the activation lanyard. A contributing factor to the Incident was that the flight crew were unable to identify the source of the mist/smoke and decided to leave the APU running in case it became necessary to shutdown both engines.

The Air Accident Investigation Sector determines that the causes of the dense mist entering the cabin, and the subsequent PBE fire onboard the EK609 Airbus A330 were:

Contributing Factor to the Incident As the flight crew were unable to identify the source of the mist/smoke, they decided to leave the APU running in case it became necessary to shutdown both engines, but they did not close the APU bleed as required by the SMOKE/FUMES/AVNCS SMOKE checklist.