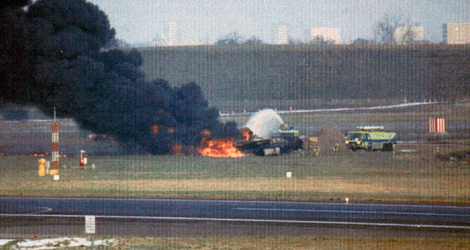 Immediately after takeoff from Runway 15 at Birmingham International Airport the aircraft began a rapid left roll, which continued despite the prompt application of full opposite aileron and rudder. The left winglet contacted the runway shoulder, the outboard part of the left wing detached and the aircraft struck the ground inverted, structurally separating the forward fuselage. Fuel released from ruptured tanks ignited and the wreckage slid to a halt on fire; the Airport Fire Service was in attendance less than 1 minute later.

The accident of EPPS Air Services private flight was not survivable.

Numerous possible causes for the uncontrolled roll were identified but all except one were eliminated.
It was concluded that the roll had resulted from the left wing stalling at an abnormally low angle of attack due to flow disturbance resulting from frost contamination of the wing.
A relatively small degree of wing surface roughness had a major adverse effect on the wing stall characteristics and the stall protection system was ineffective in this situation. Possible asymmetric de-icing by the Auxiliary Power Unit (APU) exhaust gas during pre-flight preparations may have worsened the wing-drop tendency.

N90AG’s pilots should have been aware of wing frost during pre-flight preparations but the aircraft was not de-iced and the ice detector system would not have alerted them. It was considered that the judgement and concentration of both pilots may have been impaired by the combined effects of a non-prescription drug, jet-lag and fatigue. Possible contributory factors were; the inadequate warnings on the drug packaging, Federal Aviation Administration (FAA) guidance material suggesting that polished wing frost was acceptable and melting of the frost on the right wing by the APU exhaust gas.