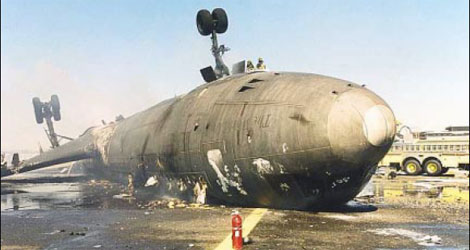 The flight from Anchorage International Airport to EWR was conducted on an instrument flight rules flight plan and operated under the provisions of 14 Code of Federal Regulations Part 121.

On board were the captain and first officer, who had taken over the flight in Anchorage for the final leg to EWR, one jumpseat passenger, and two cabin passengers.

All five occupants received minor injuries in the crash and during subsequent egress through a cockpit window.

The airplane was destroyed by impact and a postcrash fire.
The National Transportation Safety Board determines that the probable cause of this accident was the captain’s overcontrol of the airplane during the landing and his failure to execute a go-around from a destabilized flare.

Contributing to the accident was the captain’s concern with touching down early to ensure adequate stopping distance.

Safety issues discussed in this report focus on landing techniques, bounced landing recovery, and training tools and policies that promote proactive decision-making to go around if an approach is unstabilized.

Safety issues also include the use of on board computers to determine the required runway length for landing, MD-11 handling characteristics and structural integrity requirements, and hard landing inspection requirements.

Tracking hazardous materials continues to be a safety issue and is also discussed in the report.