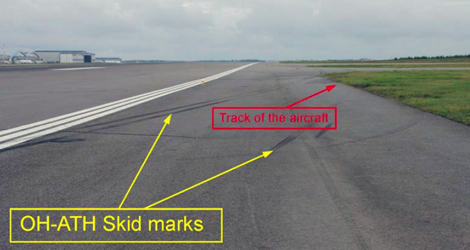 Flybe Finland flight FCM992T was flown on 19 August 2012 from Tampere-Pirkkala airport to Helsinki-Vantaa airport where the flight landed at 3:42 UTC. Prior to the flight the aircrew stayed overnight at Tampere.

The flight progressed normally until approximately 6 NM (11 km) from the threshold of Helsinki-Vantaa RWY 22L. When the flight crew reduced airspeed to below 185 KT (342 km/h) for a change of configuration and to begin the approach, the rudder’s Travel Limitation Unit (TLU) automatic functioning malfunctioned.

The meteorological conditions were good and the captain decided to proceed with the necessary checks and procedures without aborting the already ongoing approach.

When the fault appeared and the approach was being continued the aircraft was flying by automatic pilot. The flight crew believed that they had enough time to focus on identifying the fault and to complete the required procedures during the approach.

In a normal approach pattern airspeed is reduced to approximately 110 KT (204 km/h) during the approach.

When the fault appeared the flight crew had approximately 2min 30sec to identify the fault before the landing. As the approach continued and the co-pilot was searching for the relevant instructions in the Quick Reference Handbook (QRH) the captain realised that they would not have enough time for Crew Resource Management as required.

The captain completed the final check for the approach on his own and advised the co-pilot to continue establishing the fault from the QRH. The flight crew did not have enough time to interpret the QRH’s instructions for a TLU fault.

This being the case, they failed to switch on the TLU’s standby system. The QRH was still being read as the aircraft was passing the 1000 ft (300 m) and 500 ft (150 m) altitudes above the threshold elevation.

However, despite Company regulations that require in a situation like this the commencement of a go-around at 500 ft, at the very latest, they continued the approach.

At 250 ft (75 m) the flight crew noted that the normal landing criteria required by the QRH were being met and continued the approach all the way to the runway.

Due to the TLU fault rudder travel was limited to ±4 degrees.

When the captain reduced engine power to below flight idle immediately upon the first contact with the runway, the aircraft rapidly swung 14.5° to the right. The airspeed at that time was still 103 KT (190 km/h). The approach speeds calculated for the weight of the aircraft at the time of the incident were VGA 112 KT and VAPP 108 KT.

Because of the fault the flight crew used an airspeed which was 10 KT higher than the one specified in the QRH for a landing. The VAPP used was 108 KT. Upon landing the captain, who was controlling the aircraft, could not counter the aircraft’s sudden change of direction with the rudder because its travel was limited close to its centre position.

The aircraft veered off the runway with both main landing gears rolling onto the grassy runway shoulder strip approximately 550 m from the position of making first contact with the ground.

Once the flight crew managed to return the aircraft to the runway they reduced engine power to ground idle and continued to taxi normally in accordance with their ATC clearance. While taxiing the flight crew again checked the instructions associated with a TLU fault. During this check the captain noticed that the FAULT caution light in the TLU panel above was illuminated and that the TLU switch was set to the AUTO mode. The captain set the switch to the low speed (LO SPD) mode.

However, after approximately 10 seconds the captain noted that the system was inoperable and switched it back to AUTO. The flight crew did not know that the lag of the TLU’s standby system was 33±5 seconds. There were two members of the cabin crew on the flight: the Chief of Cabin (CC) and a Cabin Attendant (CA).

During takeoff and landing the CC was seated at the back of the cabin and the CA at the front. The cabin crew prepared the cabin for landing in the normal fashion. Judging from the aircraft’s oscillation, the shaking and the passengers’ reactions the cabin crew noticed that the landing roll was irregular.

The captain had given no instructions to the cabin crew as regards the fault with the flight control system. Before the landing roll ended the CC unbuckled the seat belt, left the jump seat behind the cabin and went into the passenger cabin so as to find out what was going on. Having observed the situation the CC returned to the jump seat. The CA remained seated with the seat belt fastened throughout the event.

The serious incident was caused by the mechanically centred rudder’s insufficient authority for directional control, which resulted in the aircraft veering off the runway.