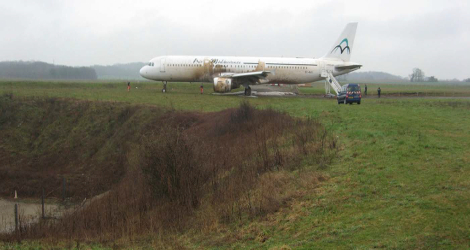 The crew of Hermes Airlines flight ML7817 made a Category 1 (CAT I) ILS approach to runway 36R at Lyon Saint-Exupéry Airport.

The meteorological conditions were such that low visibility procedures (LVO) were in place.

On passing the stabilisation height at 1,000 ft, the speed of the Hermes Airlines flight ML7817 was 57 kt above the approach speed.

At 140 ft, an inappropriate increase in thrust by the autothrust maintained the aeroplane at high speed.

The flare was long and the Hermes Airlines flight ML7817 touched the runway at 1,600 metres past the 36R threshold.

The aeroplane overran the runway and came to rest approximately 300 metres after the opposite threshold.

Continuing an approach below the stabilisation height with a speed significantly higher than the approach speed shows that the crew were not adequately aware of the situation, even though they mentioned several times their doubts on the marginal meteorological conditions and on the difficulties in reducing the aeroplane’s speed.

Continuing this unstabilised approach at an excessive approach speed triggered, below 150 ft, an uncommanded increase in engine thrust.

The crew’s delayed A/THR reduction below 20 ft made it impossible for the aeroplane to slow down sufficiently for about 15 seconds after passing the threshold.

After descending through 20 ft, the copilot’s inappropriate flare technique and the dual input phenomenon caused by the Captain significantly lengthened the flare phase.

The remaining runway distance after the touchdown of Hermes Airlines flight ML7817 made it impossible for the aeroplane to stop before the end of the runway.

The following factors contributed to continuing the unstabilised approach and the long flare: 

This website uses cookies to improve your experience while you navigate through the website. Out of these, the cookies that are categorized as necessary are stored on your browser as they are essential for the working of basic functionalities of the website. We also use third-party cookies that help us analyze and understand how you use this website. These cookies will be stored in your browser only with your consent. You also have the option to opt-out of these cookies. But opting out of some of these cookies may affect your browsing experience.
Necessary Always Enabled

Any cookies that may not be particularly necessary for the website to function and is used specifically to collect user personal data via analytics, ads, other embedded contents are termed as non-necessary cookies. It is mandatory to procure user consent prior to running these cookies on your website.