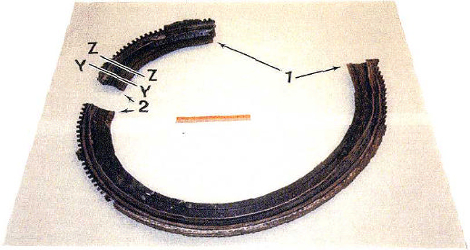 On September 5, 2000, a Boeing B747-300 of Japan Airlines (JAL) registration JA8178 was operating on a scheduled international passenger flight, as Japan Airlines flight JL726.

The aircraft, which departed from Soekarno-Hatta International Airport, Jakarta, experienced a serious incident shortly after take-off at 23:39 LT or 16:39 UTC, in which the No 1 engine’s fifth low pressure turbine (LPT) disk failed, ejecting debris damaging the airframe structure and several houses in a village.

There were a total of 377 persons on board including 360 passengers, 3 cockpit crews and 14 cabin attendants.

No persons on board or on the ground were injured.

The engine of Japan Airlines flight JL726 was shut down and after dumping 163,000 lbs. of fuel over the open sea in an area north of DKI VOR the airplane returned to Soekarno-Hatta Airport. The landing at 17:36 UTC was uneventful and no problems were encountered.

The check did not reveal any abnormalities. Additional 101 passengers boarded in Jakarta and the flight departed Jakarta with a total of 377 persons on board including a crew of three and 14 cabin attendants.

Fragments of the failed engine separated from the engine and were ejected through the exhaust nozzle, damaging the aircraft lower L/H wing, the L/H flaps, and the L/H side of the airframe skin at several places.

Fragments fell on the ground damaging 21 houses. No injuries were reported among the passengers and crew, and persons on the ground.

Actions taken by the PIC and the cabin crew prevented panic to spread among the passengers during the one hour long fuel dumping.

From the visual examination it can be concluded that :