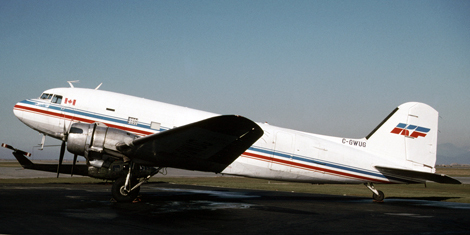 The accident aircraft, Kelowna Flightcraft Air Charter flight KFA300 was under charter to Purolator Courier Ltd. (Purolator). Since April 1998, the aircraft had been dedicated to transporting cargo on a route between Vancouver and Nanaimo, British Columbia.

On occasion, it was also used for flights to Victoria to meet Purolator’s scheduling or cargo-loading contingencies.

On the day of the accident, Kelowna Flightcraft Air Charter flight KFA300 was rerouted and tasked to fly from Vancouver to Victoria and then proceed to Nanaimo.

This change was precipitated by the delayed arrival of Purolator’s Boeing 727 at Vancouver because of inclement weather in the Toronto/Hamilton, Ontario, area.

Warning of this route change was passed to the crew members with their pre-flight planning package, which included filed instrument flight rules (IFR) flight plans for the Vancouverto- Victoria and Victoria-to-Nanaimo legs of the trip.

After takeoff, the aircraft turned left on a track toward Active Pass. During the departure climb, the captain requested an altitude of 1000 feet above sea level (asl); the tower controller approved this request.

Recorded radar data indicate that the aircraft climbed to and levelled at 1000 feet asl and then accelerated to a steady en route ground speed of 130 knots.

The aircraft left the Vancouver control zone at 0626 and entered Class E (controlled) airspace. There are no special requirements for VFR aircraft operating within this class of airspace, nor are any specific services required of the air traffic control system.

The last radar-depicted position of the aircraft is on a bearing of 189 degrees (true) and 21.8 nm from the Sea Island radar source, coincident with the crash location.