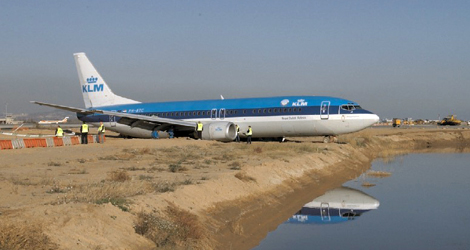 During the takeoff of a KLM flight KL1673 from Amsterdam to Barcelona, the aircraft suffered a bird strike in the area of the nose landing gear during rotation.

The flight crew informed the ATC and the flight continued without any abnormal indication in the cockpit. During the landing roll at Barcelona, when the nose wheels touched down, the aircraft started deviating to the left of runway 25R.

The flight crew applied right rudder, brakes and used the nose wheel steering tiller but could not avoid that the aircraft went off the runway through the unprepared terrain located to the left of runway 25R.

The aircraft suffered major damage during that run until it eventually came to a stop close to a wide rain drainage canal located at about 107 m from the runway axis.

An emergency evacuation was carried out in which 5 passengers suffered minor injuries. There was no fire.

As soon as the nose landing gear of KLM flight KL1673 touched the runway surface, the aircraft started deviating to the left of the runway axis.

It is considered that the accident probably happened because during the takeoff a bird strike broke one of the cables of the nose wheel steering system of the aircraft and jammed the other, which made that the nose wheels were rotated to the left during landing, causing a veering to the left that could not be arrested by full rudder deflection as the aircraft decelerated.

The subsequent application of brakes and other actions by the crew could not avoid that the aircraft went outside the runway surface.

The damages to the aircraft were increased by the condition of the runway strip due to the airport construction works. Contributing to the breaking of the cable was the fact that it was severely worn locally.

The wear could be traced back to the incorrect application of grease to the cable system during maintenance.

Despite the training and experience of the flight crew, they were unable to quickly recognize the possible cause of the deviation of the aircraft and to keep the aircraft on the runway.