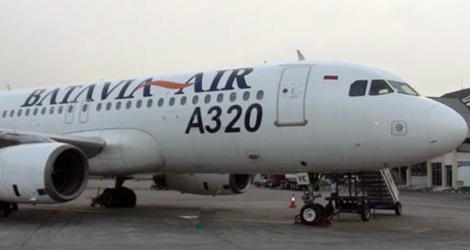 On 1 June 2008, an Airbus A320 registration PK-YVE operated by Metro Batavia Airlines flight 7P591 (Batavia Air) , on a scheduled passenger flight from Jakarta to Medan.
The flight departed at 00:10 UTC (07:10 local time) with an estimated arrival time at Medan of 02:25.
There were 140 people on board; two pilots, five cabin crew, and 133 passengers.

The Metro Batavia Airlines flight 7P591 touched down towards the departure end of the touch-down area of runway 05 at Polonia Airport, Medan at 03:04.

After a landing run of 41 seconds, the aircraft stopped on the runway adjacent to taxiway ‘D’, approximately 1,200 meters from the estimated point of touch down.

Three main-wheel tires and two main wheels were substantially damaged. The aircraft could not be taxied from the runway to the apron, nor could it be towed to the apron due to damage to the wheels.

The passengers and crew disembarked normally at taxiway ‘D’; there were no injuries.

Following an inspection of the landing gear and replacement of the damaged wheels, the aircraft was towed to the apron at 10:10. The runway was closed for about 7 hours.

The investigation of Metro Batavia Airlines flight 7P591 serious incident found that the left landing gear down-lock cable was broken.
The aircraft touched down with the wheel brakes locked due to a hydraulic lock in the system, which was the result of an incorrect manual landing gear extension procedure being used by the pilots.

The pilots’ actions indicated that they did not sufficiently understand the aircraft’s landing gear system, resulting in them using inappropriate troubleshooting and rectification procedures.

The pilots were not sufficiently confident of the aircraft’s fuel state to conduct a go around and fly past as cleared by ATC.

With the release of the final report, the National Transportation Safety Committee’s (NTSC) issued two recommendations to address the safety deficiencies identified in the report.
These covered flight crew technical knowledge of aircraft systems, fuel planning and flight management, and the regulatory oversight of the airline’s training program.