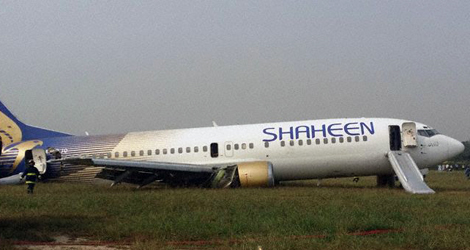 One of the pilots of a Shaheen flight NL142  was under the influence of alcohol, a medical report has revealed.

According to the first info the crew reported a problem with the main landing gear during the final approach.
The airplane touched down very softly, slightly left of the centerline : then skidded off the runway, toward the left side, after the main landing gear separated from the structure.

Airplane stopped on the grass and an evacuation was initiated.

During the evacuation some 10 passengers received minor injuries : the airplane seems to be damaged beyond repairs.

Weather at landing was good, with low visibility due to smoke :

According to Geo-TV , a local all news Television, the post analysis of one of the pilots (the Captain ?) had a alcohol level above limits. The report also revealed that the pilot was suffering from lack of sleep at the time of the emergency landing.

According to a spokesman for the Civil Aviation Authority (CAA), investigation into the accident has not yet been completed, however, medical reports have confirmed that the pilot was tired and had consumed alcohol before the flight.