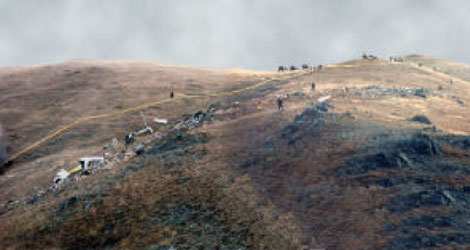 SI FLY flight KSV3275 , an ATR 42-300 registered F-OHFV crashed on 12 November 1999 at 8 h 11and was operated by the Italian airline Si Fly and chartered by the World Food Program, took off from Rome to undertake Flight KSV 3275 to Pristina with three crew members and 21 passengers on board.

At 9 h 57 min 34 s, the flight was transferred by Skopje control to the Pristina military air traffic control organisation. The latter identified it on radar and the crew replied “Flight condition is now VFR” to a request from the controller.

At 9 h 58 min 32 s, the approach controller proposed ILS interception headings to the crew. The crew accepted the controller’s proposal, the latter specifying that the radar information service was limited because of poor radar performance. He then requested that the crew turn left towards heading 350 and indicated a QNH of 1028.

At 10 h 10 min 50 s, the crew was advised that they were number two behind a faster plane 5 NM in front and the controller asked them to continue on the same heading.

a pilot’s level of fatigue particularly depends on the number of duty periods which begin early in the morning.

At 10 h 13 min 18 s, the crew called the controller and told him “I want2 to land”. The controller then requested that they turn left on heading 270 and, a few seconds later, that they indicate their estimated position relative to the PRI beacon. The crew said that they were at 15 NM, then the controller gave them heading 180 to the left.

The collision of Flight KSV 3275 with high ground was due :

The following factors contributed to the accident :