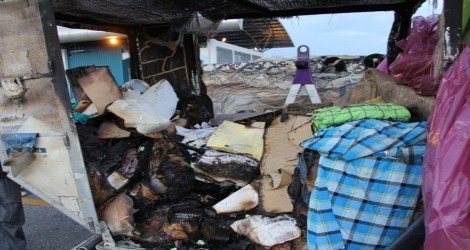 Singapore Airlines flight SQ446 was operated with an Airbus A330 aircraft (registration 9V-STO) at 18:58 (Singapore time) on 22 April 2013 from Singapore Changi Airport bound for Dhaka, Bangladesh.

The Pilot-in-command (PIC) decided to divert to Suvarnabhumi Airport in Bangkok.

The aircraft landed uneventfully and stopped on the runway to allow for an external visual inspection by the Airport Rescue and Firefighting Service (ARFS).

The aircraft taxied to a parking bay after the ARFS had found no sign of smoke or fire around the area of the aft cargo door. All the passengers and crew members disembarked safely from the aircraft using a passenger stairs.

White smoke started billowing out when the aft cargo door was opened after all on board were vacated.

The ARFS tended to it by discharging carbon dioxide into the cargo compartment.

While unloading the cargo container that had been loaded in position 42L of the aft cargo compartment of Singapore Airlines flight SQ446, the contents burst into flames. The ARFS extinguished the fire.

The contents of the cargo container from position 42L sustained significant damage. The exterior surfaces of the other cargo containers and pallets in the aft cargo compartment showed varying degree of singeing.

Aircraft damage was limited to the sidewall and ceiling panels of the aft cargo compartment, and installations on the ceiling.

There were no injuries in this incident. The Department of Civil Aviation, Thailand classified this occurrence as a serious incident and delegated the conduct of this investigation to the Air Accident Investigation Bureau (AAIB) of Singapore.

In response to the ECAM “AFT/BULK CRG SMOKE” warning and the feedback from a cabin attendant regarding a burning smell around D3L, the Singapore Airlines flight SQ446 crew discharged the cargo fire extinguishing agent into the aft and bulk cargo compartments. The action appeared to have extinguished the fire and the continual discharge of the metered discharge type bottle would have starved the aft and bulk cargo compartments of oxygen and prevented a rekindling of fire.

The area of fire origin is most likely in cargo container 42L, although it is not possible to pinpoint the exact location, given the extent of the fire damage of the contents of the container.

While the presence of ethanol, an ignitable liquid which could have fueled the fire, was found by the investigators, the heat source that was needed to ignite the ethanol could not be determined.

The investigation could not establish the source of the ethanol and there was no declared shipment of ethanol based on the description of the consignments.