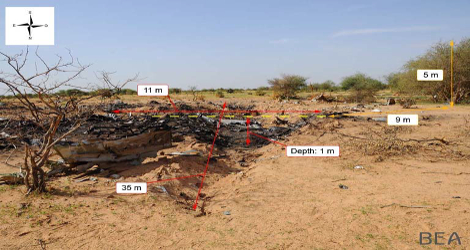 On 24 July 2014, the MD-83 registered EC-LTV was programmed to operate scheduled SWIFTAIR flight AH5017 from Ouagadougou and bound for Algiers. One hundred and ten passengers and six crew members were on board.

At 1 h 10 min 14, the crew was cleared to taxi to runway 22 and said that they wanted flight level FL 330 for cruise, then changed their minds and requested FL 310 initially, because the aeroplane’s weight was too high for FL 330.

At 1 h 13 min 05, the controller cleared the crew of SWIFTAIR flight AH5017 to perform the departure via EPEPO, towards FL 310, with a turn to the right after takeoff. The controller had prepared for a departure of this flight via GAO through the EPEPO point, through which the aeroplane had passed at the time of its arrival at Ouagadougou from Algiers. The crew read back GUPOV (25 NM west of Ouagadougou) instead of EPEPO. The controller corrected the error. The crew read back correctly.

At 1 h 15 min the crew took off, then turned to the right and took a 023° heading. At an altitude of about 10,500 ft, autopilot 1 was engaged, the autothrottle having been active since takeoff.

Nine minutes after takeoff, the crew said that they were passing through FL 145 and that they estimated EPEPO point at 01 h 38, and Algiers at 05 h 06.

At 1 h 28 min 09, the aeroplane was transferred to the Ouagadougou CCR and the crew of SWIFTAIR flight AH5017 said that they were turning to the left on heading 356° due to an avoidance manoeuvre .

At 1 h 37 min 28, the aeroplane levelled off at FL 310 at Mach 0.740. The autopilot then maintained the aeroplane’s altitude and heading, while the speed was controlled by the autothrottle. At the same time, the aeroplane was transferred to the Niamey CCR.

In the two minutes following level-off, the aeroplane’s speed increased.

From 1 h 38 min 34, and for about 30 seconds, the autothrottle was in MACH ATL mode. The engines’ EPR stabilised around 1.92 and the Mach changed from 0.758 to 0.762. The autothrottle then returned to MACH mode and the aeroplane continued to accelerate up to Mach 0.775.

At 1 h 39 min 36, the aeroplane’s speed started to decrease. About one minute later the autothrottle changed back to MACH ATL while the Mach was 0.752. Following that, the altitude remained stable, pitch and EPR increased progressively, while the engines’ N16 remained stable and the speed continued to decrease.
Between 1 h 41 min 38 and 1 h 44 min 29, the Niamey CCR and flight SWIFTAIR flight AH5017 tried to get in contact, but did not manage to do so.

Flight RAM543K offered to act as the intermediary. The crew of flight AH5017 said, at 1 h 44 min 29, that they were at FL 310 on an avoidance manoeuvre. The Niamey CCR heard this radio exchange and then gave them the 3235 transponder code. He also asked them to call back passing GAO and to transmit estimates for MOKAT point
No answer, nor any other messages from flight AH5017, reached the Niamey CCR.
At 1 h 44, EPR and N1 fluctuations on both engines appeared for about 45 seconds. Then, for about 25 seconds, the EPR decreased then increased again on two occasions from 1.6 to about 2.5. The N1s varied between 70% and 91%. Some roll oscillations between 4° to the left and to the right appeared. The autothrottle disengaged between 1 h 45 min 02 and 1 h 45 min 067 . This disengagement occurred between the first and second EPR variations.

At 1 h 45 min 06, the calibrated airspeed was 203 kt, the Mach 0.561 and the aeroplane started to descend. Pitch increased until it reached 10° at 1 h 45 min 17, then decreased slightly while the deflection of the elevators and the position of the trimmable horizontal stabiliser continued pitching up. The EPR and the engines’ RPM started to decrease towards values corresponding to idle. The roll oscillations continued and the speed continued to decrease.

At 1 h 45 min 35, the autopilot of SWIFTAIR flight AH5017 disengaged. The altitude decreased by about 1,150 ft in relation to the flight level, the calibrated airspeed was 162 kt, the Mach 0.439 and both engines were almost at idle. The aeroplane’s pitch began to decrease and the bank was increasing to the left.

The aeroplane’s pitch and bank were then subject to significant changes. They reached, respectively, 80° nose-down and 140° bank to the left. The aeroplane was pitched nosedown and banked to the left until it struck the ground. The heading decreased continuously and the flight control surfaces remained mainly deflected pitch-up and in the direction of a bank to the right. Around twenty seconds before the impact, the engine speed and EPR increased again and reached values close to maximum thrust.
The last values were recorded at 1 h 47 min 15:
– Pressure altitude: 1,601 ft, (in relation to the 1013 hPa isobar)
– Calibrated airspeed: 384 kt
– Pitch: 58° nose-down
– Bank: 10° to the left
– Magnetic heading: 099°

On the basis of the initial information gathered during the course of the investigation, the following facts have been determined: