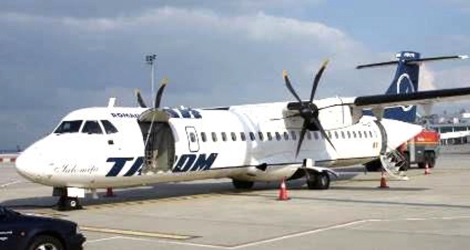 During takeoff , following the retraction of the landing gear, the fire alarm system of the engine No 2 was activated.

The pilots of Tarom flight ROT236 reported emergency, interrupted climb at an altitude of 3000 ft above sea level, and turned back to land at LHBP.

After the fire alarm, they reduced the power of the engine No 2, and then, after about one more minute, they completely shut it off, and started to operate both bottles of the engine fire extinguishing system one after the other.

After landing, Tarom flight ROT236 was escorted by the fire service vehicles, they taxied to the stand where the passengers were disembarked. Disassembly and inspection of the engine showed that a 1st stage PT rotor blade fractured at its root, which then caused fracture of several other blades, strong vibration of the gas turbine, internal oil fire, and, in conclusion, severe internal damages to the engine.

According to the test performed in the engine manufacturer’s lab, fracture of the first blade was caused by a fatigue crack starting out of the trailing edge of the turbine blade.

Neither the geometric inspection nor the material testing performed in the manufacturer’s lab could identify exactly the cause of the crack.

During the safety investigation, the IC concluded that the cause of the incident was that :
– a blade of 1st stage PT of the engine No2 fractured as a consequence of a fatigue crack

Factors increasing the risk of a more serious outcome of the incident:
– The flight crew shut off the failed engine with delay.
– The flight lasted longer than the required minimum time.
– The aircraft taxied to the apron without being inspected after landing.