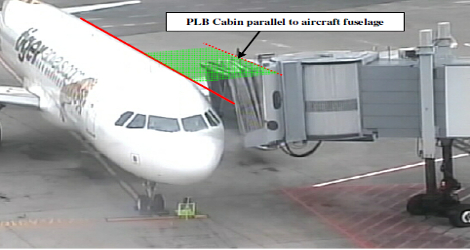 In the evening of 5 October 2012, an Airbus A320 Tiger Airways airplane 9V-TRG at Singapore Changi Airport was being prepared to be towed out for departure when the flight crew requested the ground staff to amend the flight crew’s load document.

The passenger loading bridge was re-docked to facilitate this document amendment.

During the re-docking process, the passenger loading bridge contacted the fuselage of the aircraft.

The ground crew observed scratch marks on the lower left side of the aircraft fuselage.

The damage to Tiger Airways airplane 9V-TRG was 1.2 m aft of the front cabin door, in line with the base of the door opening. A closer inspection of the damage revealed a puncture on the aircraft skin. 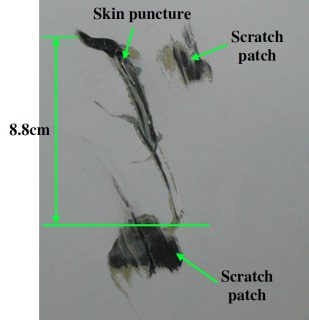 From the information gathered, the following findings are made.

Evidence shows that the PLB cab had contacted the fuselage during the re-docking.

The PLB cab was not parallel to the fuselage of Tiger Airways flight 9V-TRG.

It was tilting towards the left at an angle when it approached the aircraft, resulting in the lower corner of the right edge of the PLB cab coming into contact with the fuselage.

In the non-parallel docking position, the safety-interlocking sensors under the PLB cab did not prevent the PLB cab from contacting the fuselage.

The crew took off from Atlanta Hartsfield on a flight bound for Paris Charles de Gaulle airport. In cruise at FL 380, a cabin crew member noticed a smell chracteristic of an electrical fire at the level of seat 4F in Business Class. He turned off electrical power to...
Read More