Is flying safe , is it safer than traveling with a car : are accidents increasing or decreasing ?

Let’s start from this point : night and day, thousands of people are working overtime to make flying safer. As food poisoning might be a threat for McDonalds, a crash in any airline is the thing to avoid like the plague , in term of live costs and of image.
A small Company could shut down after an accident, a big Airline will likely continue his operations but working (and paying money) to re-get passengers and to change it’s image : because no passenger will be willing anymore to fly with an Airline that is well known for accidents. 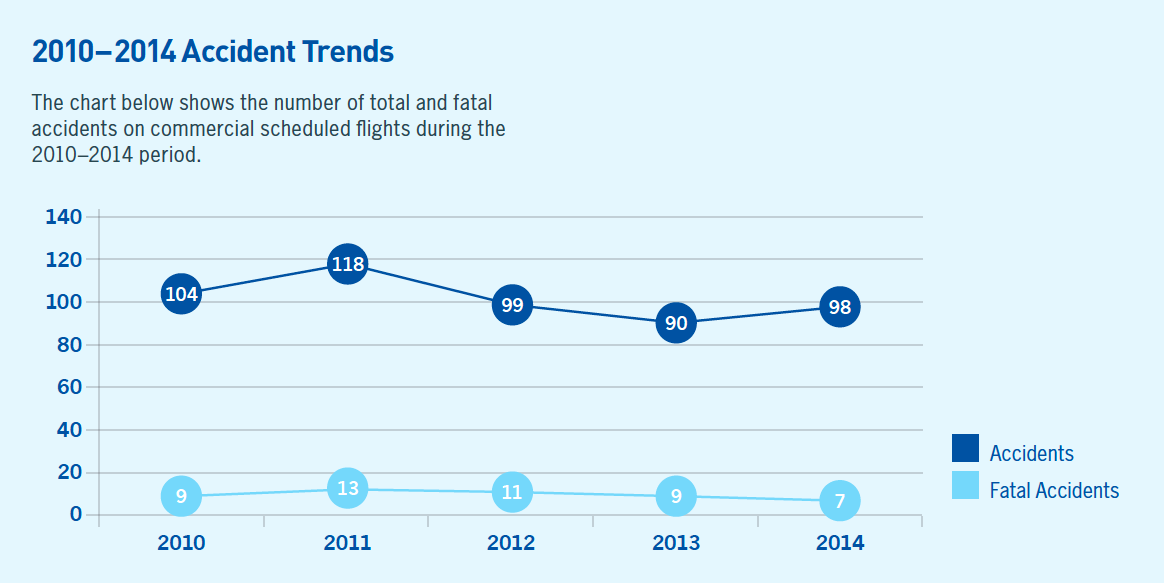 This is why – for example – the German national carrier Lufthansa, after only a few months of the Germanwings crash (the copilot that closed the captain out of the cockpit and committed suicide) , is going to shut down the owned subsidiary Germanwings Company and to delete that logo from the market.

Talking about pilots, any flight is monitored from the gate to the gate and any (they call them) “exeedance” is questioned few hours after landing: Safety is the first priority for any pilot, first of all, of course, because they are on the plane, like you, and secondly because any unsafe behavior can cost their job.

So Companies, manufacturers, crew members, Air Traffic Controllers, all of them are trying to make your flight safe, yet airplane crash :but despite the growth of the aviation industrie worldwide, in terms of flights, hours flown, legs flown etc, airplane crash are constantly decreasing. A good unit of measurement, worldwide used, that takes into account increasing of flights, is the “accident per million departures“. Take a moment to review these two independent documents that are released each year and related to the previous one : one by ICAO and one by IATA.
They both say that flight safety is improving year after year, with some countries and geographic areas slower that other.

Many times it’s not easy to find the official reports online: either because the State Agency investigating the occurrence have no website, or the report is not published or it’s an old report not made in digital format.

We continuously search for reports, classify them, write the excerpt and make them available to all pilots and aviation enthusiasts worldwide: for the sake of aviation safety.

Since official Safety Reports are not always written in English language (this is permitted by ICAO), we also provide sometimes unofficial translations: you may like to read more here.

As simple as that.

Be the first one to know.
Our promise: we'll keep email down to a minimum, you won't be spammed.
Newsletter is free, unsubscribe at any time.