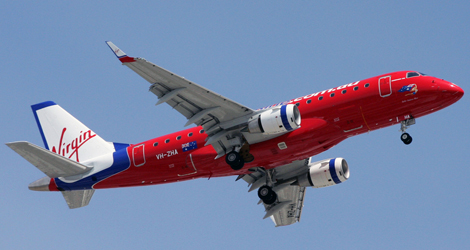 On 10 August 2008, an Embraer-Empresa Brasileira De Aeronautica ERJ170-100 aircraft, was being operated on a Virgin Blue airplane VH-ZHA scheduled passenger service from Sydney NSW, to Melbourne Vic. While positioning for landing, the crew selected a ‘flaps 1’ setting and a number of caution messages appeared on the engine indicating and crew alerting system (EICAS) screen.

The VH-ZHA’s operator found that the left number-3 slat actuator torque trip limiter had actuated enabling the caution messages to appear on the EICAS screen.

The number-3 slat actuator of Virgin Blue airplane VH-ZHA was replaced. A strip and condition report did not identify any failure of the actuator and the failure was probably a result of operating in icing conditions.

From the evidence available, the following findings are made with respect to the flight control system event involving the Virgin Blue airplane VH-ZHA Embraer-Empresa Brasileira De Aeronautica ERJ170-100 aircraft .

– The failure of the number-3 slat actuator to extend imposed landing limitations on the aircraft.

It is probable that the failure of the number-3 slat actuator to extend was the result of extremely cold conditions .